Turn That Noise Down - Nazareth 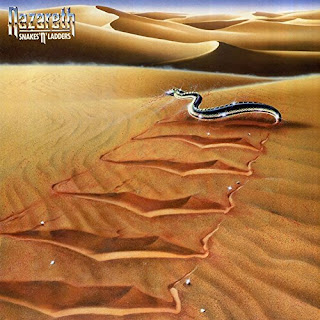 So many well-known albums turn 30 this year and Steve Taylor-Bryant and Susan Omand travel back to 1989 to revisit some of the sounds of their youth that made parents shout "Turn that noise down!" This week, Susan looks close to home to play Snakes n Ladders...

We need to talk about Nazareth. No, not the seasonally appropriate city, the band. Nazareth are the epitome of “local boys made good” for me. They were formed in Dunfermline, Fife, in 1968, that’s fifty years ago, and are STILL recording and touring, and STILL have one of the founding members in their lineup! They are also, to my mind, the band responsible for the Guns n Roses sound (*waits for Steve to recover after fainting*). No, hear me out about this. Nazareth were a huge influence on GnR and Axl Rose, to the extent that Nazareth guitarist and co-founder Manuel “Manny” Charlton, who produced their own 1975 album Hair of the Dog album, was asked to produce Appetite for Destruction AND Axl wanted Nazareth to play at his wedding! Both of which opportunities Nazareth turned down [because gigging in Fife was more important? – Ed] but the musical influence of Nazareth in GnR’s work remains.

However, I digress. Onto Snakes ‘n’ Ladders. By 1989, Nazareth had fallen a little out of favour with the UK yoofs of the day, although they were still very popular in Europe [but so was David Hasselhoff – Ed] and you can hear that in this album as it has an air of Opus about it, not least in the cover of James Hardin’s Hang on to a Dream. In fact there are several cover songs on the album, which surprised me, including Crosby Stills Nash and Young’s Helpless and Erma Franklin’s Piece of My Heart, which I think is miles better than the original (and even Janis Joplin’s version although don’t say that out loud). The rest of the album touches on many genres, from almost tribal drums in We Are Animals to downhome Mississippi blues in Lady Luck. There’s heavy hooks in The Key and I’d absolutely love to hear a GnR cover of Donna Get Off That Crack because it reminds me so much of their work.

My favourite track on the album though is Back to School. The minor key is just sublime and there are shades of real old-school 70s Ozzie, Deep Purple and Black Sabbath, and of Nazareth’s own past that just proved it was possible for them to acknowledge their roots without becoming a pastiche.