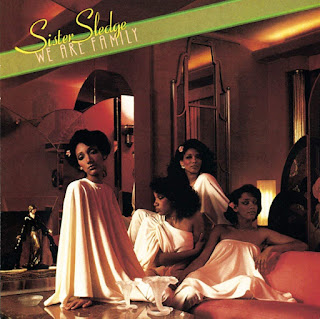 Inspired by our 1989 Turn That Noise Down (TTND) articles, Jimmy Hunter takes a look ten years further back to the music of 1979. This time, he's lost in music with Sister Sledge's album We Are Family...

For me, featuring albums from 1979 should be easy but it's not. I'm trying to get back there (some say I never left it) but remembering and articulating are two very different and equally difficult things. Disco was at its peak in 1979 and also, some claimed, at death's door (more on this later). However a couple of very talented musicians and writers (Nile Rodgers and Bernard Edwards) had scored hits with their group of mostly session singers and musicians Chic and had spotted a group of sisters who'd had very low level success with R&B and Motown covers. Nile and Bernard spotted an opportunity and offered the Sledge sisters an album ... so throughout the autumn of 1978 an album of Rodgers/Edwards songs was recorded at the legendary Power Station recording studio in New York by Sister Sledge ... my choice this week - We Are Family.

Now you may say it's an obvious choice but for me, unlikely though it may seem, it wasn't at the time. Hardly anyone outside their short fanbase had really heard of them but the songs the Chic boys penned were to propel the girls to mega heights of fame ... if only for a short while. In the UK the album was released before the first single and though at the time, sales were good, if modest, the legacy of this album, or at least the singles plucked from it, has remained intact for 40 years.

First cab off the rank is "He's The Greatest Dancer". Good, solid R&B disco with Edwards' signature bass. Kathy's voice is unexpected for a disco track but matches the previous output of Chic's female leads - rich and velvety but strong, although here it doesn't demonstrate much of a range. She was quoted at the time as saying that they were all embarrassed by the lyrics - coming from a good Christian background singing about one night stands hadn't really been a feature of their music. By the time the title track is released a long hot summer of disco is underway and the dance floors are buzzing. It couldn't fail. Both singles are released in 6 mins and 8 mins 12" versions and are worldwide hits ... while the album, well, trailed somewhat. Actually, quite a lot.

By autumn of the year Lost In Music is released and this, by a long way, is my favourite of the single releases and my favourite album track. It didn't do well commercially although it was a big dance floor hit. At almost 5 minutes long it was lifted from the album in its complete form, it's different, it has a discreet pulse and a sold backing vocal and you can hear Debbie resisting the 9 to 5 life in favour of her band. So popular it was remixed in 1984 by Nile Rodgers with added vocals from Simon le Bon and Andy Taylor of Duran Duran - at the height of their own fame at the time.

I'd like to put a word in for the other tracks. They're R&B easy listening, soul tracks and they're good. Or rather not too bad. If you listen to some of Chic's unreleased tracks over the years (now available) you can hear the similarity and it's almost as though they weren't expending too much effort on some tracks, rather saving it for ... well ... their favourites? This may be rather disingenuous because the album is good and though it didn't rack up a huge amount of sales it was very much of its time and genre. But I always felt Sister Sledge lived in an echo of success - always just missing it, not quite catching the wave. Yet that was life as a product of the Chic factory - you had to have a solid foundation because they were going to carry you.

The girls claimed this was their best album. They had another Chic production a year later (Love Somebody Today) which didn't bother the charts too much and in 1989 Kathy left but was to rejoin the girls for an occasional performance. Sadly, aged only 60, in March 2017 Joni died.