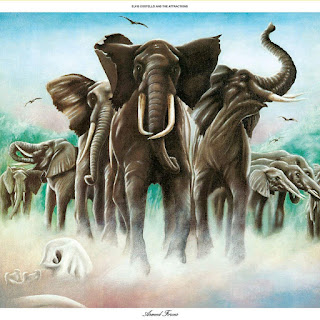 Inspired by our 1989 Turn That Noise Down (TTND) articles, Jimmy Hunter takes a look ten years further back to the music of 1979. This time, he sees The Attraction of Elvis Costello's Armed Forces...

It’s really good to be here writing about TTND from 1979. As I said in my introduction to SOTD for this week (here), there’s much to write about as the music in 1979 was genuinely a huge mix of genres and artists and doing TTND gives me more of an excuse to wax lyrical about it. All you have to do is look at an album chart for this week in 1979 to see how eclectic / messy / creative / crap the UK music scene was at that time.

I loved it. Some of the biggest selling albums of all time came from this decade and if you look at some of the chart history of certain albums (Arrival, Bridge Over Trouble Water and Tubular Bells) you’ll see that a number of albums spent literally 100’s of weeks in the top 75, re-entering the chart on several occasions. Also, because of the time of year, there was a good number of “greatest hits” type albums hanging around from the December releases in time for Christmas presents.

This week in 1979 saw a number of releases that all went on to do relatively well, like Joe Jackson’s “Look Sharp!”, with its most famous track “Is She Really Going Out With Him” getting a re-release in the summer of 1979 after flopping in the autumn of 1978 and sales of the album boosting the single.

However, the album I’m featuring here is the one that smashed its way into next week’s album chart at nr.2 : Armed Forces by Elvis Costello and the Attractions. The album is now regarded as one of Costello’s best and most political. One that also cemented him as a talented and very political songwriter. The two singles “Accidents Will Happen” and the 1979 mega hit (and a favourite of mine) “Oliver’s Army” were the two tracks more commercially likely to do well and they did.

But away from commercial sales, my favourite track from this album is Sunday’s Best. It’s dark, slightly comic and for me really speaks about the inequalities of that time. Britain wasn’t doing well, we’d had a number of strikes, the Winter of Discontent and the Labour Party was embattled, losing the fight and soon to be ousted from power for a generation. Much of this is reflected in the lyrics of the album as a whole (as is a clear pacifist message) but for me articulated particularly well in this track.