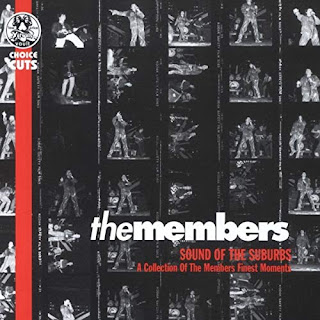 Inspired by our series of articles looking back at music released 30 years ago, Jimmy Hunter takes a step further back in time to give us a Song of the Day 1979. This time, he remembers The Sound of the Suburbs...

To quote a track from a recent TTND79 album, this week I really have been Lost In Music (thank you, I'm here all week). There's been much buzzing around the noggin for this week's choice. I've done a deep trawl the the US Billboard Top 100 form this week in 1979 and it provided me with many distractions along my meander down memory lane - and a very enjoyable one too.

Due to different release dates here and in the US, records were hits at different times and sometimes in different years. For example, it was odd listen to the US charts on the radio (eternal thanks to Paul Gambaccini) in early 1982 and hearing UK New Wave artists only just breaking when we'd been immersed in it for around 18 months. No, you're right, all of this rambling didn't make my choice any easier, but I hope you like it.

Despite my wanderings across the Atlantic, for this week I'm staying put. The SotD79 for this week in January 1979 is The Sound of the Suburbs by The Members. Now I'll admit I'm not hugely knowledgeable about the band but this single sticks in my memory as a bit of a conflict. Punk. The working class revolution. Really? Or just a bunch of rebellious middle class kids? Well that's what this song is about, listen to the lyrics - none of which resonated with me as a working class boy from a council estate. No, I didn't / couldn't relate - or perhaps I refused to.

What does ring out, loud and clear, is the rebellion against the utter banality of a life without any excitement. the same old drudgery day in and day out, conforming, doing what was expected and not disappointing. Day in and day out - an automaton who knows his place and knows that he should stay there. No, stuff that - perhaps I could relate after all. At the height of disco it's odd for me to remember and reflect on a wide range of songs that now form part of my past - songs with which I clearly had an affinity, if not an identity. Keep an open mind, dear reader, and never knowingly limit your choices.

Step back with me for a moment and enjoy a 1970's Sunday afternoon of sheer mind numbing boredom, expressed brilliantly in a punkish way ...