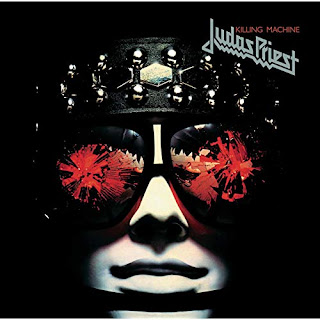 Inspired by our series of articles looking back at music released 30 years ago, Jimmy Hunter takes a step further back in time to give us a Song of the Day 1979. This time, he Takes on the World with Judas Priest...

When you look at the singles chart throughout 1979 you see really quite a mixed bag. A fair amount of hangover from early ‘70s rock and prog rock (Cream; Neil Young; Alice Cooper; Pink Floyd), punk influences like Generation X; Sham 69; The Buzzcocks and of course The Sex Pistols. Also hanging around were the ‘50s throwbacks like Showaddywaddy. Inevitably, Disco was beginning to take over, for 1979 saw that genre hit its peak. Much to my delight.

That said, my choice for Song of the Day 79 this week is … well it’s a heavy metal track. No, I didn’t like heavy metal but I fell in love with this group and its lead singer who, to me, was mesmerising, in many ways. His vocals are the first assault on your senses – soaring to almost operatic heights and still, very oddly, maintaining a reverb. His voice is hailed as one of the best in metal history, he was a singer who could sing! Ladies and gentleman, Rob Halford fronting Judas Priest with Take On The World is my choice this week. No, it doesn't make sense, does it?

Well actually it does but at that time I wouldn't have put it into words - check out his "look", it made sense to me later, but not too much later. His look was certainly different and the Harley-Davidson motor bike soon because a signature - as much as the 1970s gay leather look that remarkably, wasn't really picked up on at the time. The man oozed charisma and much more but belting out of the TV and the speakers was this delightful noise.

Take On The World was regarded as an attempt at a stadium sound - like Queen's "We Will Rock You". It could be true, Priest went on to have fairly major success and seemed to gather lots of fans and great interest in America - the home of the stadium sound. The album, Killing Machine sold well but was plundered for singles which is always a tad disappointing. In the States it was renamed "Hellbent For Leather" for US release for obvious reasons but had a Fleetwood Mac cover added which helped sales.

However for me, the look, the sound and the title all resonated and I wish I could let Rob know. In the early '80s he claimed he was bisexual but in 1998 stated that he was gay and the only out gay metal singer of the '70s. A lifestyle of heavy booze and drugs led his boyfriend committing suicide and that provided Rob with a wakeup call and he's been clean ever since. And still performing at the age of 67.

So dear reader, dust off the air guitar and let's make some noise (but not too much) ...