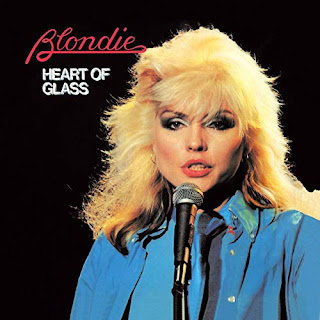 Inspired by our series of articles looking back at music released 30 years ago, Jimmy Hunter takes a step further back in time to give us a Song of the Day 1979. This time, he once had a love and it was a gas...

Let's just admit it right here - I heard this on the radio as I woke up for school one morning as it had appeared in the charts at Nr.6 this week in 1979. I was blown away, I mean, I loved Blondie ... but this was ... DISCO. Blondie goes DISCO? No, surely not (well KISS did it a year later).

Yes, dear disco bunny, my song of the day is Heart Of Glass. I hadn't bought Parallel Lines, the moderately successful album this was plucked from, but had got the previous two singles (Picture This, Hanging On The Telephone) so I was unaware of its existence. The 7" single was a different mix to the album version and didn't contain the word "ass" in the final verse but it had a punchier feel (as did the 6 minute 12" version). All synthesisers and and a mesmeric baseline, you weren't prepared for Debbie's falsetto. I don't think she was either, not initially. It was a clever track - an obvious hook but an infectious one and very unlike any of the other album tracks.

The track started life very differently - more rock than disco and nowhere near as refined and certainly not with the same vocal. Mike Chapman, Blondie's long time producer, heard this track and knew he could do something with it. He effectively rewrote it. Painstakingly putting down each track layer by layer, one on top of the other, of the course of a couple weeks he built up a very, very different sound. One that, sadly, the band couldn't reproduce so well live but it took them to the top of the singles and dance charts world wide. It also massively pushed sales of the album - it had lounged around the lower half of the top 30 for about 4 months then soared to Nr.1 for a few weeks and hung around until the summer, pushed to Nr.1 gain by Sunday Girl in the spring.

Debbie's voice - I remember with a wry grin that when the Record Mirror reviewed this single it compared Debbie's voice to Donna Summer's voice. Donna Summer, the queen of disco who was about to have a record breaking year - was told her voice sounded like a "flat woodblock" in comparison to Debbie's silkily produced voice.

But who cares, right? It's a fantastic record and I love it to this day and you can hear the original 12" version here. But the version I'd like you to listen to is Diddy's Adorable Illusion Mix, by DJ Diddy, from the 1997 album Beautiful - an album of delightful remixes by some very famous people.