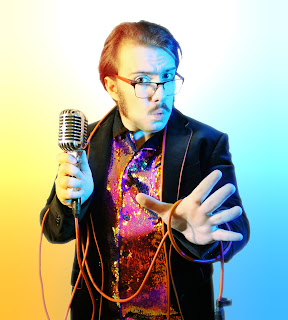 The Defective Inspector falls down a YouTube rabbit-hole but, instead of Wonderland, he discovers The Stupendium...

The internet is a glorious place and it never ceases to amaze me. From the excessively nerdy, the borderline insane to the musically talented there isn’t much left to discover. But then you get someone who somehow slides between the three, ‘Stupes,’ creator of The Stupendium, and you just have to talk about it. Stupes is someone I recently unearthed through excessive YouTube surfing and once I uncovered this gem, I needed to tell everyone I knew! Sadly, I only know a few people so wrote an article instead. Y’know since it’s got more legs. For your own personal pleasure example songs of awesomeness will be throughout this article in lieu of photos.

Stupes started out life like I presume most people do; as a bearded foetus. Following on from that he formed a YouTube channel called “The Stupendium”, originally designed to house comedy sketches and musical numbers. After striking a note with the Bendy brigade and their infamous ink machine Stupes turned a heavy focus onto nerdy/gaming music videos with YouTube viewers rushing to find out more. You can see from his early work, still accessible on his YouTube, that things were only going to get better.

Look I’m here for the music, making songs like Vault 76, House Always Wins or Pictures of Spider-Man have attracted views by hundreds of thousands of people and frankly that was more than enough for me, but it’s more than that! Stupes clearly enjoys what he does, there appears to be an element of cleverness and comedy in every song he’s made so far. In Milk Milk Lemonade you can see in the background all the sounds used in the song, let alone the excess of puns. Another? At the start of Pictures of Spider-Man he makes a stab at his own animation obsession. Simply put I admire anyone who puts this much personality and passion into their work, more so when it’s music and game related.

I had a brief chat with him via social media before writing this. We had a nice facial hair tête-à-tête and it was clear that things are indeed ramping up. Thanks to the support on Patreon, Stupes is able to move away from his current job, going part time, so he can focus on making more material. While there is no concrete agreement to say exactly what this means there appears to be a general pattern of a new video each month. That isn’t a promise mind you, no such luck there, but with him turning up the heat by assigning more time to his work we may in fact be seeing more Stupes. A polite reminder the dude is a one man show, whatever you see (unless credited otherwise) in each video is associated to the big man himself.

The next question is what does the future hold? Well I can’t make anything but educated guesses but there are a few things I’ve noticed.


1. Epic Rap Battles of History are following The Stupendium on Twitter.
2. Stupes has yet to release an album
3. His roots are in original comedy and entertainment.

I cannot say any of those facts lead to anything, but it’s what keeps me following his work. I always want to see more, and I cannot help but 'bate my breath. While it remains 'bated, I recommend you check out what I didn’t include on the article with all the information you need below. Then we can all 'bate together. But until then, have a stupendous day!

All links and images were obtained through The Stupendium
Email ThisBlogThis!Share to TwitterShare to Facebook