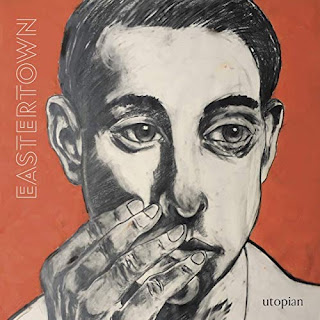 Steve Taylor-Bryant stays close to home as he discovers Utopian, the latest album by Eastertown...

Many moons ago my town had a thriving local music scene which, as a teen, I couldn’t wait to become part of. When I did, aged about sixteen, I was welcomed with open arms by not just my own band but by the other musicians in the area as well. Two guys outside of my own band that were incredibly welcoming and gracious back then were Mark Ely and Gavin Cox. Their band released an album, The Seed, and broke into the national consciousness with radio airplay on The Steve Wright show on Radio 1’s Breakfast Show and television appearances on Channel 4 with Chris Evans. I unfortunately moved soon after they ‘broke’ so wasn’t around the town as they became the stars they were destined to be and it took me a long time to move back and rediscover my love for local talent. Eastertown were never far from my mind though and I was delighted recently to discover that not only are they still together but they are thriving and gave released a new album, Utopian.

What I was hoping for from the album was a sense of what I used to get from watching them live. Many bands record great albums and many bands are great live but it’s rare that a band can nail the perfection of a studio production but keep that live essence intact. On Utopian I can guarantee you Eastertown have completely nailed it. Splinters starts the album off and all my early musical memories come flooding back as soon as Ely’s voice hits my ears. 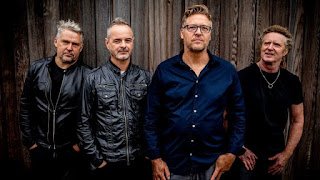 Lyrically the band are so good at conveying whatever message they want to and, with Ely’s soul dripping off his vocal and a very tight band hitting every melody, the album is off to a flyer. Unstoppable is slower in tempo but not in style, with some wonderful harmony work and constrained drums that make it a lot bigger than standard ballad fare. A Thousand Times has always been my favourite Eastertown track and always will be and to hear what I used to love live recorded with the same energy fills me with joy. The changes in guitar work, the effortless drum work, the subtle but funky bass work, this tune is honestly an incredibly well constructed piece of music, so deserving of any praise it garners.

So Long and Camouflage see a slower pace again and a soulful band laying bare all that they are, Camouflage in particular a beautiful listen. Torch & Flame has an anthemic stadium feel, you can imagine the band at a huge arena, sweaty, smiling as they break into this song as an encore at the end of a successful gig in front of thousands of adoring fans. Rise is the song that made the band famous and is honestly just such a pleasure to hear again, a great jumping on point if you are unfamiliar with Eastertown.

Big Bad World, Come & Take a Walk, and Do You Feel the Same close out a flawless album. A tight group of musicians that are highly talented and work just so well as a group, lyrically better than most modern chart stuff, with a singer whose voice should be cloned for future generations to use. Recorded by Romesh Dondaganda at Longwave studios in Cardiff and mastered at Abbey Road by Frank Arkwright, Utopian is a musical masterpiece that leads me to doubt if Ely, Cox, Newton, and Roe even know what having an off day might mean. It’s such a pleasure to listen to, such a joy to write about, and my musical highlight of the last few months.