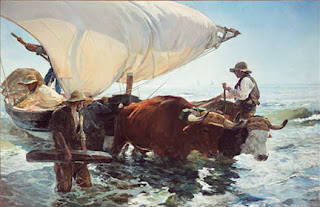 The first major exhibition in the UK for over a century of the artist known as Spain’s Impressionist, Joaquín Sorolla y Bastida (1863–1923), opens at the National Gallery in March...

Sorolla: Spanish Master of Light will include portraits, landscapes, and genre scenes of Spanish life, as well as the landscapes, garden views, and beach scenes for which he is most renowned.

Filling the Sainsbury Wing exhibition galleries, the display will feature sixty works spanning the artist’s career, including important masterpieces on loan from public and private collections in Europe and the United States. This will be the first UK retrospective of the artist since 1908 when Sorolla himself mounted an exhibition at London’s Grafton Galleries where he was promoted as The World’s Greatest Living Painter.

While it was his sun-drenched depictions of the life, landscapes and traditions of Spain, as well as his gifts as a portraitist, which sealed his fame, Sorolla, who trained in Valencia and studied in Madrid and Rome, first won an international reputation for major works tackling social subjects. For the first time in the UK a series of these prized early social paintings will be brought together including his 'The Return from Fishing' (1894, Paris, Musée d'Orsay - pictured above), which was bought by the French government; and 'Sewing the Sail' (1896, Fondazione Musei Civici di Venezia, Galleria Internazionale d'Arte Moderna di Ca' Pesaro, Venice), which was acquired by the city of Venice. Also displayed will be Sad Inheritance! (1899, Colección Fundación Bancaja, Valencia) kept in the Church of the Ascension on New York’s Fifth Avenue for over fifty years until it was returned to Spain in 1981.

One third of the paintings in 'Sorolla: Spanish Master of Light' will come from private collections and another third will be generously lent by the Museo Sorolla, one of Madrid’s most dazzling small museums, which occupies the house and garden Sorolla designed and built for his family. The Museo, now a Spanish national museum, was created following his death from bequests by the artist’s family. 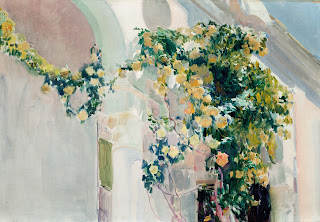 The first room includes portraits of Sorolla’s wife Clotilde as well as his daughters María and Elena, and son Joaquín, who became the Museo Sorolla’s first director. Sorolla married Clotilde, the daughter of his first major patron, in 1888. She remained his favourite model, barely appearing to age over the decades. The strong family connection resonates poignantly with the painting of a rose bush from Sorolla’s house which, legend has it, withered when the artist passed away and wilted away entirely when Clotilde died.

The second room focuses on the 1890s, when Spain witnessed a period of social unrest as well as the final collapse of its overseas empire. During this time Sorolla launched his career with a series of monumental canvases concerned with the realities and hardships of Spanish life. His first great success, 'Another Marguerite!' (1892, Mildred Lane Kemper Art Museum, Washington University in St. Louis), which depicted a woman arrested for murdering her child, was acclaimed in Madrid in 1892. From there, Sorolla set about gaining an international reputation by sending his pictures to exhibitions across Europe. While Sorolla largely moved away from socially engaged subjects after 1900, the pictures had a lasting impact on the next generation of Spanish painters, including the young Picasso. The third room shows how Sorolla saw himself as belonging to the great tradition of Spanish artists such as Velázquez and Goya, whose works he closely studied at the Prado in Madrid. In his portraits, Sorolla often adopted their distinctive palette of blacks, greys and creams. He also sought to achieve the same psychological penetration and sense of human presence for which both painters were famous. Velázquez’s influence is present in two paintings; the portrait of the American painter Ralph Clarkson of 1911 (Oregon Public Library and Gallery) features a copy of Velázquez’s 'Las Meninas' (1656), from the Prado, in the background; while Sorolla’s reclining 'Female Nude' (1902, Private Collection) is a response to the master’s famous ‘Rokeby Venus’ (1651) in the National Gallery. 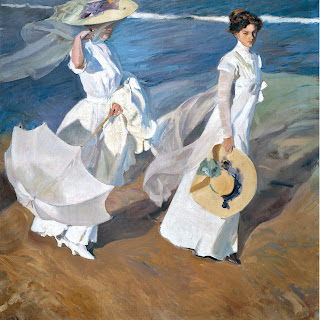 Room Four celebrates Sorolla’s love of sunlight and the sea. Having grown up by the coast, Sorolla began after 1900 to create a substantial body of work, painted out of doors, documenting the mixture of leisure and work he witnessed on beaches close to Valencia and further down the coast at Jávea. These scenes proved hugely popular especially in the United States.

Room Five contains studies for Sorolla’s commission for the Hispanic Society of America in New York in 1911 to create a vast mural-like series of paintings entitled Vision of Spain. For these works, painted between 1911 and 1919, Sorolla travelled extensively through Spain, documenting the country’s regional dress, occupations, and traditions. Local people, often provided by Sorolla with costumes and props, were depicted in situ. The exhibition includes four large-scale preparatory studies (1912, Museo Sorolla, Madrid) for 'Vision of Spain' demonstrating the intensity with which the artist engaged in Spanish folk tradition. Sorolla also painted the landscapes in these regions which he then incorporated in the Hispanic Society paintings. 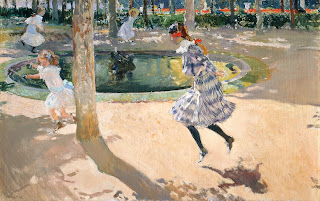 The sixth room of the exhibition is devoted to Sorolla’s views of landscapes and gardens. From a panoramic vista of the barren mountains of the Sierra Nevada glowing in evening light to the medieval towers of Burgos Cathedral under snow, Sorolla had a gift for finding the viewpoint to best communicate the atmosphere and character of a setting. On several visits to the south, he recorded the country’s heritage in views of the gardens of the Alcázar in Seville and the Alhambra in Granada.

The final room highlights Sorolla’s fascination with depicting his family in large canvases painted out of doors such as 'Strolling along the Seashore' (1909, Fundación Museo Sorolla, Madrid) and 'The Siesta' (1911, Museo Sorolla, Madrid), one of Sorolla’s most innovative paintings which, with its brilliant florescent green shades, verges on abstraction.

With his health failing in June 1920, Sorolla ceased painting and died on the 10th August 1923. There are few paintings by Sorolla in UK public collections, yet the work of this spirited and technically-gifted painter relates to the National Gallery’s collection of Spanish Old Masters, Velázquez and Goya, and the work of Sorolla’s contemporaries across Europe, including Sargent and Monet.

Christopher Riopelle, The Neil Westreich Curator of Post 1800 Paintings at the National Gallery, and curator of 'Sorolla: Spanish Master of Light', said “Sorolla was an exceptionally gifted painter. His ability to capture life and movement, often out of doors and on a grand scale, remains impressive. His pictures radiate the dazzle of sunlight on water, the heat of a sultry afternoon and the force of a stiff sea breeze. Compositionally daring, his increasingly high-keyed use of colour suggests an awareness of developments in modern art. But as an artist, he always remained committed to painting Spanish life in all its complexity.”

Dr Gabriele Finaldi, Director of the National Gallery, added “Between Goya and Picasso, Sorolla was Spain’s most celebrated painter. He painted tough social themes but became famous for his sun-drenched beach scenes and luxuriant gardens. No one before or since has painted Mediterranean sunlight like Sorolla.”

The exhibition runs from 18 March – 7 July 2019 and is curated by Christopher Riopelle, The Neil Westreich Curator of Post 1800 Paintings at the National Gallery, London. The Curatorial Consultant is Blanca Pons-Sorolla, the artist’s great-granddaughter and a specialist in his work.