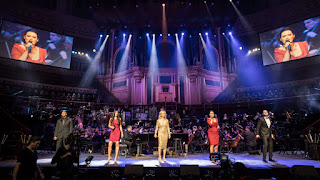 A special concert celebrating over two decades of stunning Disney Broadway shows returns to the Royal Albert Hall for three performances only in March...

Disney’s Broadway Hits – which sold out in minutes when it received its UK premiere at the venue in 2016 – will feature the BBC Concert Orchestra and a galaxy of stars performing show-stoppers from an astonishing selection of stage successes.

This musical extravaganza will feature numbers from Tony and Academy Award-winning scores, including Beauty and the Beast, Aida, The Lion King, Aladdin, Mary Poppins, Tarzan and The Hunchback of Notre Dame, sung by top talent from the West End and beyond, including Ava Brennan, Shaun Escoffery, Willemijn Verkaik and Anton Zetterholm.

Lucy Noble, Artistic Director at the Royal Albert Hall, said: “We’re extremely excited to welcome Disney’s Broadway Hits back to the Hall’s famous stage with a new cast of stars, following the sell-out success of its UK premiere. This unique show brings together the best of Disney on stage for one unforgettable, hit-packed performance, featuring the finest in contemporary musical theatre talent.”

Stars confirmed for 2019 are Ava Brennan – whose credits include Nala in the West End production of The Lion King – soul singer Shaun Escoffrey (The Lion King, Les Misérables, Tommy, Mama I Want to Sing), Dutch actress Willemijn Verkaik (Tarzan, Wicked’s Elphaba for a record-breaking 2,000 performances) and German theatre and TV star Anton Zetterholm(Tarzan, Les Misérables, The Phantom of the Opera).

The BBC Concert Orchestra will be conducted by Keith Lockhart. Tickets are now on sale from www.royalalberthall.com.