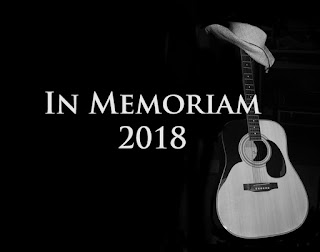 Susan Omand looks back at just a few of the people from the music business that we lost last year...

I’ve written In Memoriam lists at the start of a new year for several years now. This time, twenty names, some more familiar than others but, when you consider their work, you realise what an impact they had in their own specific field and on the work of others. This is by no means an exhaustive list - every year there seem to be always far too many, so these are just a few from the music industry that I thought were worth a mention.


Eddie Clarke, 67, Motörhead guitarist and the last of the original line-up

Dolores O'Riordan, 46, singer-songwriter and guitarist with The Cranberries

Jim Rodford, 76, musician who worked with Argent, The Kinks, The Zombies

Reggie Lucas, 65, American songwriter who wrote most of the songs for Madonna's debut album

Joe Jackson, 89, father and band manager of the Jackson 5

Charles Aznavour, 94, French-Armenian singer who had hits with "She" and "The Old Fashioned Way"

Ray Sawyer, 81, singer-songwriter with Doctor Hook (he was the one with the eyepatch)