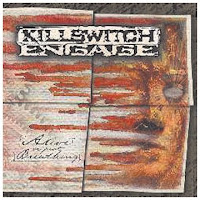 In an effort to further her musical education, Susan Omand has been set "homework" of listening to albums released after the 1980s that she has missed out on. This week she re-engages with Killswitch Engage...

So we come to the first album of Year 2 and… it’s by a band whose music I got introduced to as part of last year’s Educating Omand, with their fourth album As Daylight Dies (you can read that article here). In that article I had, shall we say, a bit of an issue with the vocals because I didn't get the need for the RAAAAR screaming. Thanks to learning more about the musical style with Educating Omand, I can now appreciate that a bit more, or at least better inured to it, after subjecting my brain to it so much over the last year that it now gets tuned out like white noise, so I was looking forward to revisiting the band’s work to see if my opinion on their singer had changed… only to be told by this year's teacher David Ames that this, their second album, Alive or Just Breathing, had a completely different frontman to the one I had listened to before. Ah well, so much for that idea. It’s not like we plan this or anything after all.

Anyway, on to the album. I said above that this is their second studio outing but, really, it’s their first on a major label so someone at Roadrunner (a division of Warner Bros) must have seen something in them to sign them. And that something, I think, is singer Jesse Leach. Not only did his screaming not annoy me nearly so much as his successor’s, but his singing voice is absolutely excellent and there’s a lot more “clean vocal” on the album. In fact, it’s a much cleaner sound all round with an excellent backline, and Dutkeiwicz, who moved to guitar from drums after this album (yes, I’ve been reading up), making a superb job of the percussion. It also feels like a much more melodic album, with even the heaviest stuff being much more than the “just noise” of some bands and reminding me more of proper old-school metal from back in the day.

And I feel that, now, I can start to compare and contrast with other music in the same vein, thanks to my new-found education. For instance, the start of Life to Lifeless reminds me rhythmically of System of a Down’s Prison Song in its abruptness. By sharp contrast there’s My Last Serenade with such a lot going on musically, an almost ballad-like chorus being backed up by thrash percussion and the different time signatures overlaying each other to make a complex and interesting composition, making it more Five Finger Death Punch in style (and, yes, I can almost hear the eye-rolling from teacher because I’ve probably got that completely wrong).

My favourite track changed regularly the more of the album I listened to, it just got better and better. I liked My Last Serenade a lot, until I listened to Just Barely Breathing, whose minor key riffs were amazing and beautifully balanced with the harder aspects. But then I heard The Element of One which is just utterly brilliant. Oh, and the 2-minute instrumental Without a Name is beautiful and completely unexpected, although not at all out of place on the album.

However, even the worst of the tracks on the album are vastly improved by Leach’s vocal, in stark contrast to Jones, the singer whose vocals I tended to ignore on all the songs on the earlier later album. I was very pleased to find out in my research that Leach came back to the band as singer in 2012 so I’ll definitely go looking for an album from this later KSE era to see what he has matured into and you can call me even more educated this time.