News - English as a Second Language 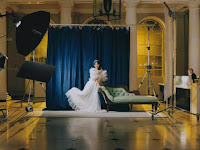 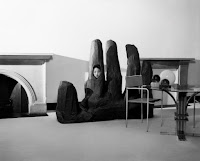 In our globalised and interconnected world, English as a Second Language celebrates the vitality and importance of fresh perspectives within fashion photography.

English as a Second Language sees acclaimed Asian-born, London-based photographers Moon and Ng, responding directly to Somerset House’s historical setting with a new series of photography works commissioned by Somerset House. Employing an otherworldly and playful approach to their practice, the photographers incorporate cultural signifiers, set design and fashion to present their unique take on Western aesthetics and fashion ideals. Bringing distinct Asian perspectives to their work, Moon and Ng challenge the concept of ‘otherness’ and reflect upon the power fashion photography holds in shaping our perceptions of beauty, style and taste.

Curated by Shonagh Marshall, the exhibition explores the artists’ feelings of being ‘lost in translation’, a feeling which, as artists living in a foreign city navigating different languages and shifting landscapes, informs Moon and Ng’s search for capturing beauty in the often overlooked and unseen narratives in our everyday lives.


Arranged across three rooms, visitors first encounter the work of critically acclaimed fashion photographer and founder of A Nice Magazine, Hanna Moon. Hanna Moon is an artist, photographer and creative interlocutor, born in South Korea, and based in London. Her first critically-acclaimed contribution to fashion culture was her launch of A Nice Magazine, created by Moon for her graduation from Central Saint Martins, London, in 2014. Intentionally working with ideas and subjects outside of the conventions of fashion photography, Moon has defined herself as an important voice in the field. In ‘Heejin and Moffy’, Moon utilises the neoclassical architecture of Somerset House to capture imagery of her two muses; Moffy, from London, and Heejin, from South Korea. Shot at night, Moon rebelliously ‘invades’ the site to create a series of intimate works. Utilising bespoke sets and objects that reflect her personal experiences living in UK, including a surgical-style face mask and Heejin’s mother’s wedding dress, Moon presents a dramatic reimagining of Somerset House’s neoclassical setting.

English as a Second Language continues with Joyce Ng, a rising star within today’s fashion landscape, who uses street-casted models, natural environments and props to create images which feel both familiar, yet surreal. Like Hanna Moon, Joyce Ng is a London-based fashion photographer who also studied at Central Saint Martins, graduating in 2014. Joyce spent her youth in the multitude of sprawling malls throughout the city of formerly-colonised Hong Kong. In her images she constructs a play between reality and built environments, making subtle reference to vast array of product merchandising she grew up with. A surreal tone throughout, our eye is constantly drawn to something odd, be it a pagoda-shaped shadow to a giant papier maché head.For this exhibition, Joyce cast solely from Somerset House’s vibrant community across a six-week period, inviting visitors and residents to take part in a series of shoots on-site. Drawing inspiration from the renowned sixteenth century Chinese novel Journey to the West, a story of the epic fabled pilgrimage of Tang Sanzang, a Buddhist monk journeying West in search of sacred texts, Joyce selected participants, all of whom had no prior modelling experience, to become characters in a fragmented narrative through the hidden and public spaces of Somerset House.

A number of public events will accompany the exhibition including in-conversation curator talks and workshops that explore fashion photography’s social, political and global impact. Further details can be found on the Somerset House website soon.