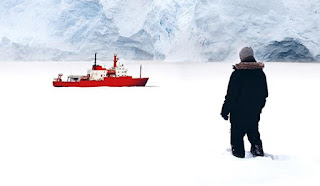 Telling the story of an expeditionary team of scientists who become trapped in the frozen Arctic wastelands, Anthropocene is directed by Matthew Richardson (Rigoletto 2018) and designed by Samal Blak, the award-winning team behind MacRae and Welsh’s five-star opera The Devil Inside (2016). It opens in Glasgow on 24th January before touring to both Edinburgh and London.

Anthropocene is the fourth collaboration between MacRae and Welsh, a fruitful partnership initially born of the 15-minute opera Remembrance Day in 2009. The composer-librettist team went on to create Ghost Patrol in 2012, which won a South Bank Sky Arts Award and was nominated for an Olivier Award, and 2016’s The Devil Inside, based on a short story by Robert Louis Stevenson.

Inverness-born MacRae’s work has been performed at the Royal Opera House and Edinburgh International Festival, and by ensembles including Scottish Chamber Orchestra and Hebrides Ensemble. He is currently Composer in Association at Lammermuir Festival.

He said of the new work, ‘The triumph of human self-interest over nature and over other humans: this is the essence of the Anthropocene age. It is also the cause of man-made climate change, countless environmental catastrophes and the exploitation of marginalised peoples by wealthy nations and individuals. When faced with extreme isolation, a loss of control over their destiny, and personal catastrophe, the appearance of a mysterious outsider poses an impossible dilemma for the crew of the Anthropocene, and becomes the focus of temptation, sympathy, ambition, empathy and fascination.

‘It’s been a joy to work on Anthropocene with librettist Louise Welsh, who brings such depth, colour and variety to this original story, and I’m delighted that it will be brought to the stage by our hugely imaginative long-term collaborators, Matthew Richardson and Samal Blak, and conducted by Stuart Stratford.’

A Professor of Creative Writing at University of Glasgow, Welsh is the author of a number of popular novels including award-winning The Cutting Room and Plague Times Trilogy.

She said, ‘Anthropocene is one of the most exciting projects I have been involved with. This is my fourth opera with Stuart MacRae for Scottish Opera and it is an honour to write words which I know he will set to a unique palette of music.

‘The themes of Anthropocene are both perennial and up-to-the-minute. Human beings have always striven to conquer distant and hostile territories. The twenty-first century has opened the field to rich amateurs who might previously have stayed at home and charted on maps the progress of expeditions they had funded. Anthropocene is a story of over-wielding ambition, murder, human sacrifice and thwarted love. It is also an exploration of the tensions between magic and science.’

Stratford said, ’Stuart MacRae and Louise Welsh have yet again delivered an amazing piece of music theatre for Scottish Opera. An incredibly imaginative story of discovery, betrayal and violent sacrifice with daring and dazzling virtuoso orchestral textures, Anthropocene will keep the audience gripped throughout.’

Those who wish to discover more about how the production was created can attend Pre-show Talks, and audience members with a visual impairment can enjoy the full opera experience at audio-described performances, which have a live commentary describing the action on stage without compromising the music.

Find out more and book tickets on the Scottish Opera Website.