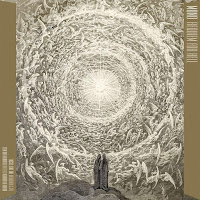 Having been caught doing maths in music class, Susan Omand has been given detention and yet another list of albums to listen to in order to further her music education. This time she listens to Requiem for Hell by Mono (in stereo)...

Before I start on the music for this “Detention” album, a quick word about the album art because it’s absolutely Messianic. The circling of angels/souls either on the ascent away from earth to heaven or the descent from an earthly plain to this hell is, I think, epic and utterly redolent of Dante’s Divine Comedy. I went looking, to try and discover who the artist was, and the artwork is indeed taken from 19th century artist Gustave Doré’s illustrations for Dante Alighieri’s Visions of Hell. So that works then.

It’s the insidious creep of the start of Death in Rebirth that sets the tone for the album. Layer by layer the music sneaks in, repeating musical phrases in a way that sounds almost operatic in its composition as instruments pick up on the leitmotif and it’s not until more than half way through the 8 minute track that this is diverged from where there is a notable uplift in the rhythm and the melody top notes finally kick in. From there it’s uphill all the way as the tempo and key continually rise, increasing tensions until a zenith where the music finally breaks down into some of the most wonderful feedback “noise” I have ever heard on an album. It is awe-inspiring.

A sharp change of mood for Stellar, the shortest track on the album at under 5 minutes which is almost religious in its opening feel. If the previous track was operatic, this is baroque. A simple quartet of instruments pick up on a similar chord progression from the previous track and carry it reverentially, with a tinkly melody building like raindrops. It’s atmospheric.

From the shortest track on the album to the longest, title, track coming in at over 17 minutes. Again, there’s the long slow build of instrument after instrument dropping their own ideas into the mix until the “middle eight” (ok middle five minutes) break. Carrying on my classical music analogy, this is the full symphony, complete with separate movements and moods and the richness and depth of the orchestration is undeniable. It could almost be a Bond movie soundtrack. (To be honest, it’s nearly long enough on its own!)

Another quiet, quasi-religious experience at the start of the penultimate track, Ely’s Heartbeat, before it settles down again into slowly repeating and expanding phrasing. On doing a bit of investigation, because the title seemed very specific and personal, it turns out to be inspired by the birth of a child and its own in utero heartbeat and, indeed, this can be heard strongly in the percussion which takes much more of a centre stage this time.

Final track on the album is, appropriately, The Last Scene and it does very much feel like a denouement. There is some lovely use of minor keys alongside the usual build and refrain.

If I have a criticism about MONO, they appear to be somewhat of a one trick pony, even though it is a trick they do very well indeed. This makes a whole album feel a bit repetitive for me but I reckon, if these tracks were individually peppered through others on a compilation mix-tape (I may be showing my age here – I think you young-uns call it a playlist) then the music works but, for me at least, it gets very same-y track to track. It’s also a “thing” with some modern instrumental music, the repetition, because there’s no vocal to rely on to drag a story aspect of the song along and it’s often not compensated for in the writing, so it’s easy to fall into a formula.

So, am I educated? Yes I think so. Again, this was a band that I had never heard of before so it was a cool discovery and I’m pleased I listened to them. I also really like their use of feedback and distortion as “instruments” in their own right and I will listen to them again, only as one-off tracks rather than an album’s worth.