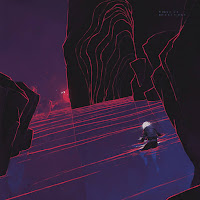 Having been caught doing maths in music class, Susan Omand has been given detention and yet another list of albums to listen to in order to further her music education. This time she reflects on Refractions by Meniscus...

I don’t mind admitting that I spent the first listen of the first track of this album waiting for a vocal to kick in and repeating the phrase “please don’t muck it up, please don’t muck it up” out loud because, mostly, such music that I have started to enjoy in these Educating Omand lists has been marred by the RAAARRR of a growly voice. However, neither RAARRR nor singer spoiled the album, as Refractions turned out to be all instrumental.

So, if I don’t have vocals to complain about, what else can I tell you about it? Surprisingly little, to be honest. I had never even heard of Meniscus before now, so I went digging and, apparently, they are based in Australia, which was unexpected. With the sound they create, especially in the start of the opening track, Doom, I would definitely have pitched them as more Scandinavian, although later tracks veer more towards a Pink Floyd floaty feel than a prog rock operatic thing.

Indeed I found that all their music was more suited to background than an intense aural experience but that isn’t necessarily a bad thing, we all need a bit of disengagement and passive, rather than active, listening now and again. There’s nothing jarring or difficult about any track on the album either, it just bimbles along with a lot of long phrasing and repetition being, well, nice to listen to. At the risk of damning with faint praise, which is not what I intend at all, I mean “nice” in that I found myself drifting and thinking of other things while basking in the soundscapedness (it’s a word) of it rather than having to concentrate and being held to account, feeling like I’m about to be asked questions, the whole time. Instead, Refractions is restful, easy and inoffensive. The kind of thing you could put on for your folks visiting or at a party that people are going to talk over and it wouldn’t really matter to anyone.

I think, having had the album on a few times now, my favourite track is Fingers. There is some good solid storytelling in it and you can catch the proginess (also a word) of the prog rock a lot more in it, there seems to be more going on here than in other tracks, yes, even the one called Hamster. So, am I educated this time? N’yeah… ish. Refractions is not blow-me-away brilliant, nor is it utterly awful. I wouldn’t seek it out but neither would I switch is off. It’s just… nice.

Find the whole album to stream/download on Bandcamp