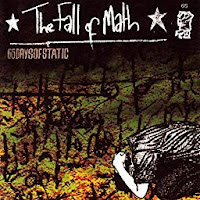 Having been caught doing maths in music class, Susan Omand has been given detention and yet another list of albums to listen to in order to further her music education. For her final album of the year she witnesses The Fall of Math...

Oh, the irony that the final album on my list of #EducatingOmand Detention albums, instigated because I was allegedly caught doing maths in Mr Jones' music class earlier in the year, is called The Downfall of Math. Nice one, Mr Sambrook.

And, talking of titles, the first thing I indeed noticed about the album after its ironic name was the song titles themselves. I mean, yeah, I usually read the tracklisting on any album but I wasn’t expecting to see names like “The Cat is a Landmine”, “I Swallowed Hard, Like I Understood” or, what must now be my most favourite song title ever, “Install a Beak in the Heart that Clucks Time in Arabic.” Seriously, how could you NOT want to listen to that?

So what of the music itself? For a band called 65 Days of Static it’s appropriate that the first track starts with, yes, static. Fizzy white noise abounds in the first track so don’t worry, your stereo hasn’t gone funny. The short opener then goes on to become a mashup of The Orb and Faithless as ambient samples mix with a seriously 90s dancefloor beat. Next we get to the wonderfully titled Beak song that I mentioned, which still has the electronic beat with computerised beeps and fab keys which gradually gets heavier with the addition of guitars and the most amazing drum solo that I’ve heard for a while as, all the time, that insistent beep hangs in the background. It really is quite impressive. The excellent percussion continues through Retreat! Retreat! before being replaced by electronica again, along with wind and melancholy piano in the amazing 107 seconds of Default This. More electronica starts I Swallowed Hard… with an insistent fly-buzz noise and marvellously heavy bass which settles down again to become basically what sounds like an 80s arcade machine being played in the middle of a gig, like someone in the pub got bored of listening to the band. And I must admit that, by this point, I’d got a bit bored as well, even though it’s only half way through the album. The intros are all superb; interesting, unusual, experimental, but often this falls away a couple of minutes into the rest of the track to leave a rock band’s niteclub DJ remix. It’s all good but I found that I tended to tune out of it as the track went on until the next intro grabbed my attention.