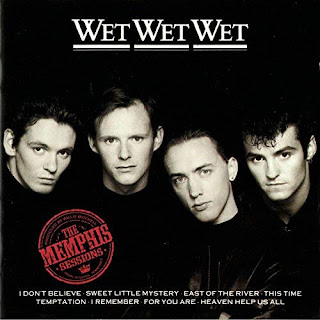 So many well-known albums turn 30 this year and Steve Taylor-Bryant and Susan Omand travel back to 1988 to revisit some of the sounds of their youth that made parents shout "Turn that noise down!" This week, Steve remembers The Memphis Sessions...

At one point in my life, due to having a (legal counsel insist I use the term "adorable" here, and also that I wash my mouth out with soap and bleach) sister a little younger than me, Wet Wet Wet was the band I had to listen to most. I didn’t realise until many years later how that musical abuse had seeped into my tastes and I found I quite liked them! Forgive me father, it has been six days since my last listen to Lip Service...

It was what came out of the Memphis Sessions that really stuck through the years. Whilst I actually adore Lip Service, from 1992’s High on the Happy Side, you can’t not admire the quality that arrived in the form of The Memphis Sessions and, whilst it was recorded before their debut Popped In, Souled Out (read Susan's review of that album here), it was a remarkable second studio album that showed a band that had more than a couple of catchy tunes in their repertoire.

There was some hit single fare in the likes of Sweet Little Mystery and, to this day, I still listen to East of the River, that note held so long by Pellow as the brass kicks in is something to behold and shows so much talent. I Don’t Believe (Sonny’s Lettah) mixes gospel, soul and reggae in a way I honestly don’t think you could try and get to work today but in the 80’s it somehow does. This Time is a beautiful ballad and you can see Marti Pellow’s cheeky grin and twinkling eyes come through in the vocal and, yep, we are now in full-on man crush territory. Temptation was a forgotten song by me and, to be honest, is still a bit forgettable, although live it’s an astounding track that really gets the audience going, on record it just feels flat and out of place. I Remember is by far the most 80’s sounding track, complete with out-of-place saxophone, but I can’t help singing along, bastard song! I love For You Are, it has all the hallmarks of a huge song in its arrangement but its subtlety is as remarkable as its powerful moments. A ridiculously great listen. The very short, 33 minutes I think, album finishes with Heaven Help Us All which is a perfect slice of what Wet Wet Wet did best. It’s catchy, it has a real soulful and gospel feel, meaningful lyrics, a poppy element and a chance to show off quite how good Marti Pellow is as a singer.

I’ll still take High on the Happy Side over any other Wet Wet Wet release but if you have a spare half hour and want to chill out to real soulful tunes with great musical arrangements you could do a lot worse than pressing play on The Memphis Sessions.