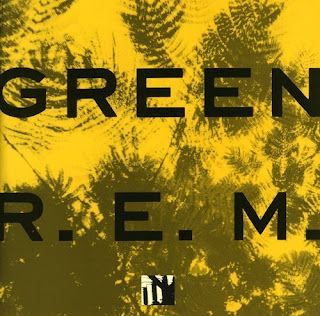 So many well-known albums turn 30 this year and Steve Taylor-Bryant and Susan Omand travel back to 1988 to revisit some of the sounds of their youth that made parents shout "Turn that noise down!" This week, Steve goes Green listening to R.E.M...

My last album review from 1988 sees me saving the best until last as A) it’s R.E.M and B) it contains two of my favourite R.E.M tracks in album opener Pop Song 89, a track I’ve played live a few times myself and gives me endless enjoyment, and Orange Crush, a track that feels and sounds more like later R.E.M than most other tracks on Green. But it’s Pop Song 89 that starts the record and very rightly brings you a changing R.E.M. Whilst this release was nowhere near a debut, it was the first on a major label, it was the first that would marketed to foreign markets heavily, and it was the first from a band that wanted to be different. Pop Song 89 sees Stipe explain he doesn’t know what people want from pop music anymore, what place a band has in changing times and is the perfect platform in which to unleash a different, more mature band. Whilst being together as long as R.E.M had been could destroy most bands through infighting, these group just seemed to refresh themselves. They swapped instruments, they swapped any perceived importance they had and this led to a reinvigorated line up that just went up about twenty levels from where they were previously.

Get Up, and the main recipient of instrument swapping, You Are The Everything, are beautiful and melodic whilst Stand introduces that R.E.M uplifting element that often is a contrast to a lyric. Not many bands can convey important messages through happy melody but R.E.M excel and that started here on Green with the likes of Stand. World Leader Pretend has some really interesting instrumentation and percussive sounds that just really suit quite dark lyrics and The Wrong Child is one of those rare tracks from a band where I instantly think John Lennon could have done this; it’s almost anti-pop group material and seems to convey a band that are musically excellent but still perhaps a little unhappy with the celebrity they garner. Whatever it is it’s as far removed from a Shiny Happy People type pop track as can be and one of my standouts on a record of standouts. Orange Crush, as fantastic a political tune as you’ll find, a beautiful and melodic pop song about the effects of Agent Orange on U.S soldiers? Magnificent.

Turn You Inside Out is a rockier tune than maybe fans had been used to up to that point and directs its gaze at the relationship that celebrities have with their fans. Hairshirt, possibly my least favourite track on Green but still a good one, leads into a brilliant two track finale. First up I Remember California with its subtle but effective drums goes from what seems like a love letter to California to somewhere quite dark. Lyrics like:

as chilling as they are delightful to hear delivered. Finishing up with Untitled was a joy, Untitled was completely different to anything I may have expected before from the band and showed that, with R.E.M, you may be able to put them on a major label but you’ll never stop them doing whatever they want to.

Green is an epic record full of everything we love about R.E.M and with some of tracks sounding like they deserve to be on the more independent releases previously out and some forewarning the huge sound that would come, Green is a great jumping on point for anyone who is somehow not familiar with this remarkable band.