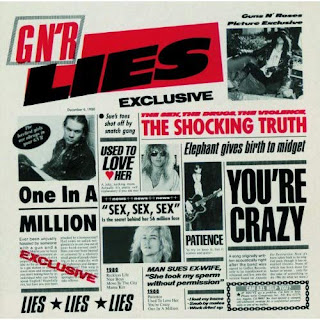 So many well-known albums turn 30 this year and Steve Taylor-Bryant and Susan Omand travel back to 1988 to revisit some of the sounds of their youth that made parents shout "Turn that noise down!" This week, Susan gets to the truth behind Lies...

What is there left for me to say about Guns n Roses that has not already been argued about over countless pints? (see Steve's Chinese Democracy defence here if you need proof.)

Lies was GnR’s “difficult” second studio album between Appetite for Destruction and Use Your Illusion 1 and, to be honest, it’s a little bit of a cheaty one. At only 33 minutes long, the first 4 tracks of the 8 track album had been already released as their 1986 EP of demo tracks Live Like a Suicide which, incidentally, wasn’t “live” because recording a gig was too expensive so they added someone else’s stadium crowd in post-production, and another track, You’re Crazy, was a slowed down rehash of a song off Appetite. So Lies is probably a good name for it.

However, that doesn’t mean it’s a bad album. The EP tracks are all hard driving rock and roll, their cover version of Angry Anderson's band Rose Tattoo’s Nice Boys makes good use of the fake crowd noise and their Aerosmith cover sounds more like Aerosmith than Aerosmith did. Of the rest of the album, the acoustic set is a real departure from GnR before and since – bear in mind this was before the phenomenon of MTV Unplugged – and the country music feel took a bit of getting used to after the full on hardcore of the first four tracks but, looking back on it, it really brings home the A Side/B Side feel of an old vinyl.

My favourite track on the album has to be the only original song from the EP, Move to the City. Although it’ll never be a classic, it’s still a song that will get the head bopping and hints at the beginnings of that trademark GnR sound. Shut up Steve.