Review - The Prodigy, No Tourists 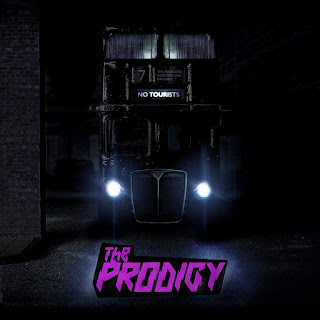 Susan Omand gets a bit side-tracked and listens to The Prodigy's new album No Tourists...

It had been that kind of day. I logged on to my Amazon music streaming thingie (tech term) full of good intentions of getting some of the album reviews done that I’ve been lagging behind on and…. THE PRODIGY HAVE A NEW ALBUM OUT! Cancel everything, I thought, this needs to be listened to now, so here’s a track-by-track. You’re welcome.

Need Some1 sounds very like Beastie Boys Intergalactic in bits and is a great nearly-instrumental introduction, with just a few sampled vocals from Loleatta Holloway whose voice I recognised because she was also featured on the Black Box single Ride on Time in the late 1980s.

Light Up the Sky is next and has an intro that bugged me a LOT to start with because it was a sample of a song that I thought I should know from back in the day. Unless I was into 1970’s Czech pop at some point then I am mistaken (as a side note it is indeed possible that I’ve heard it before, there were some weird days back in the day) but anyway, having solved the mystery I went back and listened to it again and the mix of big-beat Breathe electronica with 1970’s style pop-rock is phenomenal.

We Live Forever continues the trend of sticking a hard rock beat behind electronic music and the use of repetitive ascending scales with High pitched sirens really heightens the feeling of tension that I’ve wanted from Prodigy ever since Fat of the Land.

The title track comes next, No Tourists. A slower but just as heavy beat this time and shades of James Bond for some reason for me. I could really see this working as a film theme. And, lo and behold, when I did a bit of a dig, there is indeed a sample of a film soundtrack in there. Not James Bond but a Michael Winner directed con caper starring Roger Moore and Michael Caine. So same thing really.

Fight Fire With Fire (featuring the wonderfully named hip-hop band Ho99o9, who also co-wrote the track) is a complete change of tack, with howling electronics and scratching under some seriously good rap. I may have to investigate this band further at a later date.

Timebomb Zone takes me right back to 90s clubbing, glow sticks and concrete dance-floors. This one will pack dance-floors in a way that The Prodigy haven’t since Charly. The synth is light and bright and the bass, although heavier than their 90s sound, really doesn’t overshadow the techno club noise.

Wow, Champions of London has some spectacular percussion! And it seems that Leo Crabtree is the man responsible, playing live drums rather than a sample. It is simply mind-blowing. As for the rest of the song, it has a similar feel to Firestarter with that dangerous-in-your-face-ness although its edge is blunted somewhat because I’m now expecting it on a Prodigy album but it’s still good.

Boom Boom Tap has the problem that it reminds me too much of Will Smith’s Boom (Shake the Room) (which, btw, is a good song, just not what I want from The Prodigy) and it took a couple of listens to get past doing the “tick tick tick BOOM” actions. Probably my least favourite track on the album – but it did drop me into a Will Smith rabbit hole afterwards.

Resonate has such a hooky start. I love the distortion of both guitar and vocal. There’s a good build through the song and it all goes how you would want it to, again leaving the vocals to be purely sampled interjections.

The final track, Give Me a Signal, is another collaboration, this time with a singer/songwriter called Barns Courtney. He’s one of these “bubbling under” indie artists whose work is probably better known than he is, with his single Fire having featured in a lot of TV soundtracks.

So that’s it. Ten tracks, 37 minutes. Overall, it’s fine, some bits excellent, some a bit meh, Champions of London and Light up the Sky are the big winners for me, but it’s very much harking back to days past and even further past. It’s not so much a re-invention of the band’s sound, more of a re-hash but, that said, if you loved the sound of their early stuff with a little bit more beef in the backing, this is a great fun album to listen to.