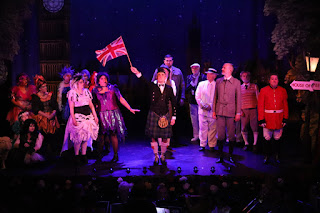 Robert Barton-Ancliffe reviews The Cotswold Savoyards' new production of Iolanthe. So is it "the true embodiment of everything that's excellent"...

The Cotswold Savoyards return to the Cheltenham stage once again with Iolanthe, once a staple of British light Opera, now a heady, energetic fairytale that flits between the chaotic hotbed of Parliamentary politics and a whimsical hinterland where romance and humour rule the day.

The story, though familiar to aficionados of Gilbert and Sullivan, is increasingly unknown to today’s general audiences, but that works in the production’s favour. To view Iolanthe cold one can ignore the clichés and delight at a script that, while stately in its Victorian cadence, is nevertheless a highly relevant as a satire of British Politics as it ever was. Similar in tone to William Shakespeare’s A Midsummer Night’s Dream, Iolanthe tells the story of the titular fairy, who long ago faced banishment from her idyllic realm for the sin of marrying a mortal man. Her return sets into motion a chain of events that sees the mortal and fairy world collide in absurd fashion as her son Strephon sets his heart on marrying mortal Phyllis, a ward of chancery to a British Lord, who has at his side the collected buffoonery of the British political establishment. Thus the story unfolds in two acts through a series of comic encounters, misunderstandings and idyllic musings to a light yet beautiful score.

The production displays a welcome lightness of touch from the get go as the chorus of fairies descend in a riot of colour and style that captures the gaudy and rebellious spirit of youth in Thatcher’s post-punk Britain, stomping about the stage in joyous contrast to the light and breathy classical score. The peers, not to be outdone, appear in an array of tweed and striped leisurewear redolent of the hard working political classes, all pompous airs and crusty entitlement. Both choruses perform with enthusiasm and capture the attention with plenty of well thought out mannerisms. Moreover, when the entire production gets into full flow, one can’t help but get swept up in the sheer joi de vivre of the piece, particularly as the choruses of fairies and peers finally collide towards the end of act one. 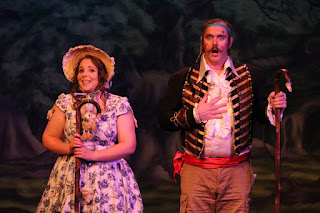 The principal players remain tightly focussed and energetic as the absurdity unfolds around them. Alice Wilman as Phyllis is a delightful presence, managing to imbue her character with the requisite innocence without sacrificing an ounce of her commanding presence, made all the more impressive by her complete command of a demanding vocal score. Samuel Taunton is suitably loony and befuddled as the good natured Strephon, embodying the identity crisis of a man born half fairy, half mortal whilst retaining his excellent diction, a vital skill with such wordy material. Sarah Thompson and Bronwen Carless as Iolanthe and the Fairy Queen respectfully, stand out from the colourful crowd and cut commanding figures, even as all around them lose their heads, and Anthony Jones, Michael Ferris, Simon Lewis and Brian Crosby as the Lord Chancellor and his cronies play it admirably straight even as their very characters are ripe for derision in this age where no politician is above the public’s scathing eye.

Director Diana Dodd has brought forth a thoroughly entertaining and atmospheric production whose various elements all work in harmony despite the disparate influences. The set is simple yet well-conceived, with beautifully painted back cloths and minimal dressing giving the performers room to breathe, but also, thanks to colourful and warm lighting, looking suitably enchanting. The aforementioned post-punk aesthetic of the fairies has a wonderful visual impact, and while in contrast to the Victorian dandy look of the peers in their various states of dress, these two worlds blend wonderfully together and give the production a sense of cohesion that is often lacking in community theatre. The tweaks to the script are equally significant here, taking a piece that might seem otherwise quaint and giving it a new edge, seamlessly weaving in jokes about Brexit and the omnishambles of today’s politics in Britain to prove how timeless Gilbert and Sullivan’s original idea remains.

The world as it is today is often an ugly and bitter place, where people of all stripes feel pitted against each other and no ideology seems entirely above reproach. The Cotswold Savoyards are here to remind us that while people will always be people they can, if given the right spin and a sprinkling or fairy dust, be endlessly entertaining.

Please note - this is an amateur production but that just means the cast and crew are doing this for love rather than money!
Email ThisBlogThis!Share to TwitterShare to Facebook