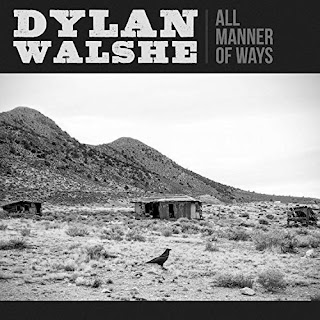 In among all the festive film press releases, Christmas "BuyMe "guides and Black Friday deals in the AlbieMedia email inbox last week I found a little note that was obviously not an automated mailing list thing. It started with “How ye doin’” and went on to explain that the sender was Dylan Walshe, an Irish singer living in Nashville, and would we like to review his new album called All Manner of Ways? Let’s see… polite, personal, non-pushy, non-pitchy request. Check. Interesting sounding background. Check. Music that I know nothing about. Check! So I gave it a listen. And...

Why have I not heard of this guy before?!

From the first few notes of the first track Blind is Blind, I was smiling and settling into my folky comfort zone usually reserved for the likes of The Waterboys or The Chieftains (yes the musicianship is that good) and then the vocals started… and this is NOT the voice I was expecting but, by God, it works. What I was expecting was a light, bright, heavily brogued Irish voice that skipped around the tune while never quite hitting the mark. Think about how Bushmill’s Irish Whiskey would sound if it could sing. That. Instead, what I got is a deep, dark, velvety, proper Irish draft Guinness of a voice. Rich, rounded, complex and ever so smooth but still with a hint of a bite. Imagine Hozier singing time-honoured Irish folk songs with a Nashville country band and you have it. It just absolutely blew me away.

Once I got over the shock of the unexpected and had adjusted my musical tastebuds, so to speak, I went back to the album. And there’s not a bad track on here. I find it amazing that these are all new and original compositions because they have the weight of tradition behind them. You could easily imagine them being sung somewhere in Ireland, in an impromptu bar jam session, since time immemorial because everybody should already know the words and tunes. The Nashville country edge does creep through now and again, especially in Luck is a Beggar, Luck is a King, but that is no bad thing at all. There are up-tempo tracks and melancholy ballads, all filled to the brim with meaningful lyrics; Trickle-down Effect gives Pete Seeger a run for his money as far as protest songs go. And, as I said at the start, the musicianship is also wonderful, combining country steel guitar with Irish fiddles is just a sublime noise. I loved the harmonica on Ruined too, which gave it a bluesy tone.

My absolute favourite track on the album has to be Death Dance, though with Cut It Down running a close second. The fiddles on both reminded me so much of The Devil Went Down to Georgia (in a good way) and the use of minor grace-notes gave me shivers (also in a good way).

So, in among the barrage of generic, festive gift shopping suggestions, here is my special recommendation. Buy Dylan Walshe’s music for everyone. They’ll thank you for it, in All Manner of Ways.

Stream & Buy All Manner of Ways on Bandcamp.

Find the album on Amazon:-