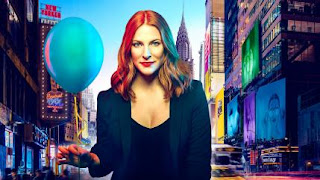 Tony Cross found himself in good Company as he watched the musical at the Gielgud Theatre...

Company is the story of Bobbie, who lives in New York City. She’s about to celebrate her 35th birthday. She’s single. And surrounded by married friends, all of whom seem intensely happy, and going out with three men. Not wise men. Men. People are trying to get her to meet someone. To settle down. Bobbie just wants to be left alone, although she too has doubts about whether being alone is a good thing or not.

I don’t want to make this review all autobiographical but, by heaven’s, that’s a plot line that speaks to me which is why it ended up smacking me all over the place emotionally.

Although not from the start. I had to grow into this. It was funny, and the songs were great, but it didn’t quite connect but then it gradually started to wrap its musical tentacles around me. The final song ‘Being Alive’ – and the lead into the final song – broke me a bit. Has still broken me. I’ve listened to it everyday since I saw this. I’ve found dozens of different versions of YouTube. That was a surprise, but the cleverness of Company is that it builds up to this moment and then delivers it perfectly.

And, you know, ‘Being Alive’ was the sort of song that before I undertook my quest to see more musicals with my friend Dr Carrie Dunn, I would have pointed my finger at as the kind of twee nonsense that made me hate musicals. Except it isn’t. It’s the perfect emotional payoff to everything we’ve seen previously. And Bobby’s little ‘but who will I take care of…’ followed by her angrier ‘What do you get?’ marks the point at which we know something is changing.

And the performances are wonderful. In the original stage version – and on the Soundtrack album I’m listening to now – Bobby was a man. In this version Bobbie is a woman. I don’t know if that works better or not. I originally thought that women have a more obvious biological clock ticking that makes this seem better with a female lead. And then I remembered my own personal feelings and realised that it doesn’t matter if you’re a man or a woman, we're always a little frightened of both being alone and being together, but in the end, what are we afraid of?

Rosalie Craig is brilliant as Bobbie, as she was when I saw her in ‘The Light Princess’ at the National Theatre back in 2013. She’s a fine actor with a stonkingly good voice.

She’s more than ably supported by the rest of the cast. Patti Lupone, who even I in my musical ignorance was aware of, is fabulous as Joanne, who gets to sing ‘The Ladies Who Lunch’, which is my second favourite song of the night. She’s got charisma has Lupone.

The rest of the cast are also damned good. I loved Mel Giedroyc and Gavin Spokes as Sarah and Harry in particular. And Gavin Spokes is part of ‘Sorry-Grateful’, which is my third favourite song of the night as I think it does a sterling job of being a realistic love song. Indeed the same can be said for ‘The Little Things You Do Together’, which is also bloody funny.

So, I recommend this highly.

It’s funny, moving and rather smart. Just like me on a good day.


Company is currently on at the Gielgud Theatre and is taking bookings until 30th March at time of writing. Find out more and book tickets here.