News - The Nutcracker on the Big Screen 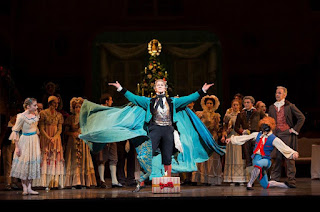 A Festive favourite from the Royal Ballet, The Nutcracker will be screened live in UK cinemas this December...

Cinema audiences around the UK will be treated to The Royal Ballet’s The Nutcracker on Monday 3rd December 2018, broadcast live from Covent Garden in the heart of London. There will be an encore screening on Sunday 9th December 2018.

A family favourite, The Nutcracker is based on E.T.A Hoffmann’s beloved Christmas tale. The story follows Clara and the enchanted Nutcracker as they defeat the evil Mouse King, and go on a magical journey to the Kingdom of Sweets where they meet the Sugar Plum Fairy and an array of other memorable characters. The ballet is set to one of Tchaikovsky’s most ravishing scores, which perfectly captures the spirit of the festive season. Peter Wright’s production has enchanted audiences since it was first performed by The Royal Ballet in 1984 and continues to be a staple of the Company repertory.

The Royal Opera House cinema broadcasts offer audiences the best seats in the house and include exclusive behind-the-scenes footage and interviews presented by Darcey Bussell and Ore Oduba and incredibly detailed close-ups of performers. On Monday 3rd December, Royal Ballet Principal Marianela Nuñez will dance the Sugar Plum Fairy, joined by Vadim Muntagirov as her Prince, Anna Rose O’Sullivan as Clara, Marcelino Sambé as Hans Peter (the Nutcracker) and Gary Avis as Drosselmeyer.


The Royal Ballet’s The Nutcracker will be shown in UK cinemas on Monday 3rd December 2018  at 7.15pm and lasts approximately two hours and 20 minutes with one interval. There will be an encore screening on Sunday 9th December 2018. The Nutcracker will also be broadcast in cinemas around the world. Further details on dates and venues are available here: https://www.roh.org.uk/cinemas