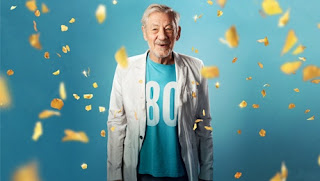 Ian McKellen is to celebrate his 80th birthday in 2019 by raising funds for theatres, with a new solo show which will play on 80 stages across the UK, including the RSC...

Celebrating 80 years, this intimate show is a mixture of anecdotes and acting, including Tolkien, Shakespeare, others...and you, the audience.

Ian has a long association with the Royal Shakespeare Company where his work has included title roles in Trevor Nunn’s productions of Macbeth, Romeo and Juliet and King Lear.

The show will begin its journey around the UK with a tour of London. Then, across the country, Ian will visit theatres large and small with which he has personal connections and happy memories, including amateur groups he knew as a child and notable playhouses he has played in as a professional actor over the past half-century.

Ian has a long association with the Royal Shakespeare Company where his work has included title roles in Trevor Nunn’s productions of Macbeth, Romeo and Juliet and King Lear.

All proceeds from the performances at the RSC will go towards the Company’s Stitch in Time campaign to restore and redevelop the RSC’s Costume Workshop.

Ian McKellen said “I’m celebrating my 80th birthday by touring a new solo show to theatres I know well and a few that I don’t. The show starts with Gandalf and will probably end with an invitation to act with me on stage. In-between there will be anecdotes and acting. I open at my local arts centre in January and end up by August in Orkney.

“Live theatre has always been thrilling to me, as an actor and in the audience. Growing up in Lancashire, I was grateful to those companies who toured beyond London and I’ve always enjoyed repaying that debt by touring up and down the country myself, with the RSC, the National Theatre, Prospect Theatre, the Actors’ Company, as well as with commercial productions.

“I first came to the old Memorial Theatre in Stratford (now the Royal Shakespeare Theatre) as a schoolboy, camping at Tiddington and queuing through the night for half a crown standing places at the back of the stalls. There I saw the theatre giants of my youth.

“In 1976 for the RSC I was Romeo, Leontes and Macbeth (with Judi Dench). Most recently I was King Lear in The Courtyard Theatre (the RSC’s temporary theatre whilst the Royal Shakespeare Theatre was redeveloped), followed by a world tour. So it’s with gratitude and excitement that I’ll be making my debut in the Swan Theatre, and on the same day be back on the main stage where I last performed with Prince Charles as part of Shakespeare Live! From The RSC - which marked the 400th anniversary of Shakespeare’s death - in 2016.

“In my new solo show I can share memories of Stratford and reprise Shakespeare. There’ll also be a chance for you to get onstage with me. All profits will support the Stitch In Time campaign, restoring and redeveloping the RSC’s costume workshops. See you there, I hope!”

Gregory Doran, RSC Artistic Director, said: “I am thrilled that Ian will be bringing his one man show to Stratford to play in both the Swan and Royal Shakespeare Theatres. We are grateful that the proceeds from the performances will go towards Stitch in Time, our public fundraising campaign to restore and redevelop our Costume Workshop, which has £250,000 left to raise. The RSC has the largest in-house costume-making department of any British theatre, but the current workshops are in urgent need of attention to create modern-day costume-making facilities.”

IAN McKELLEN ON STAGE is presented by Ambassador Theatre Group and directed by Sean Mathias.