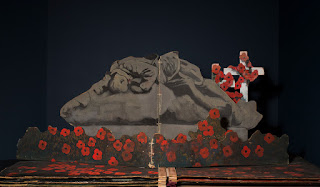 To mark 100 years since the end of World War One, V&A Dundee is displaying a poignant stage set designed and painted by Scottish artist John Byrne...

Depicting a war memorial in a field of poppies, the scene is one of five held within the pages of a huge pop-up book used as the original set for the play The Cheviot, the Stag and the Black, Black Oil.

The pop-up book, loaned to V&A Dundee by the National Library of Scotland, can be found in the museum’s Scottish Design Galleries.

The memorial page can be seen until Monday 3rd December when the pop-up book will be turned back to the peaceful Highland scene which formed the backdrop to the opening of the play.

Due to the delicate nature of the stage set, which was made in 1973 from corrugated cardboard and brown gummed paper tape, conservators and technicians from the National Library of Scotland travelled to Dundee to change the scene ahead of Armistice Day on Sunday.

Here's a look at conservators changing the scenes in the book in a NLS video from 2016.

“The powerful image of the war memorial in the shape of a fallen soldier surrounded by red poppies stood to represent those from across Scotland who died during war and the devastating impact this had on their communities.

“Visitors to the museum will be able to see it until Monday 3 December when the pop-up book will again return to the opening scene of the play.”

Get a closer look at the Memorial scenery in this 360 3D view.

The Cheviot, the Stag and the Black, Black Oil was the first play performed by the theatre group known as 7:84 (Scotland). The company used theatre as a platform to tell stories about the Highland Clearances, taking the play to village halls across the Highlands and islands.

On Monday 3 December at 12.00 National Library of Scotland curator Shona Hunter will present a free talk at V&A Dundee discussing the extensive conservation work carried out on the pop-up book. Tickets are now available via the V&A Dundee website.