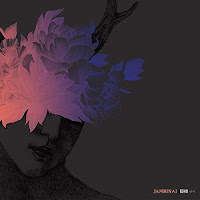 Having been caught doing maths in music class, Susan Omand has been given detention and yet another list of albums to listen to in order to further her music education. This time she retreats to A Hermitage...

We have a winner! Yes, OK, I know it’s not a competition but whatever prizes are out there for bands and albums that would otherwise have passed me by had it not been for #EducatingOmand, Jambinai should get all of them. I put their album, A Hermitage, on with a view to listening to it while doing something else at the same time and just sat, head between the speakers, in open-mouthed awe for the full 47 minutes.

In case you don’t know who they are, like I didn’t up until a few days ago, Jambinai are a Korean “avant-rock” band and their work is utterly unique. This comes, mostly, from the fact that they combine traditional Korean folk instruments into their music and it creates an almost classical avant-garde atonality, akin to the works of Webern and Schoenberg. Now, I totally get that this band and this album will be an acquired taste, but I personally think it is a work of genius.

The first track on the album, Wardrobe, gave me that same jolt as I got from Prodigy’s Firestarter. That feeling of total disorientation, confusion, almost fear, coupled with a near addictive need for more. And more is what I got.

Echo of Creation is next and this track is where you really start to hear the traditional instruments and pentatonic scale bubbling along over a rock bass. The pizzicato strings that kick in in the middle are shiver-inducingly good.

For Everything That You Lost has such a gentle start with walking strings and an almost saxophone-like woodwind picking up singular piano notes and plucked geomungo strings (yes, I looked up what the instrument was called) before the bass guitar rumbles in and the layers develop. It’s the counterpoint of rhythms that make this an utterly fascinating track and it was my favourite track until I heard...

Abyss. Oh my god, Abyss. This seriously blew me away. The screaming atonality of it all. The multilayers of everything happening at once pulling your attention in all directions and then they throw in some rap. In Korean. It. Is. Stunning. Incidentally, after some investigation, the rap is done by Korean hip-hop artist Ignito. I have made a note of this for further listening.

Deus Benedicat Tibi has a hard act to follow but follow it it does… with bagpipes! Well, probably not actual bagpipes but what an amazing sound contrasted with the cymbals keeping time. Yes, most people will think this one is “just noise” but just concentrate on what all the different instruments are doing and appreciate the layering if nothing else.

The Mountain comes next. This is probably the most traditional start to all of the tracks and you can really see the Asian landscape being portrayed here, it’s like a sumi-e painting building up from minimalist monochrome strokes, adding colour and richness as the track continues.

Naburak is the penultimate track and has an almost flamenco sound to it. There should be stamping and clapping and swirling in circles here. I love the insistence of the driving bass and the almost monotonic (no, not monotonous) nature of it. It’s like every instrument is just rhythm and percussion. Then there’s the break a couple of minutes from the end of the track where it’s just a flutey thing and singular string notes before the cacophony returns. It’s brilliant.

Finally, it’s They Keep Silence and the vocal chanting over the geomungo at the start builds into something that sounds more psychedelic than anything before it drops into syncopated beeping and feedback over an industrial sounding bass. Yes, that looks odd when I write it but that’s the best way I can think of to describe it.

Like all modern art (yes, that is how I am categorising it), this is a challenging listen that takes concentration and will not be for everyone. It’s NOT an album that you put on while you’re doing something else either because it demands your full attention and each listener, in fact, each listen, will have its own interpretation.

It goes without question that this time, yes, I am educated. This album has been added to the playlist to be enjoyed regularly, as I know there is more to discover in this Korean tapestry.