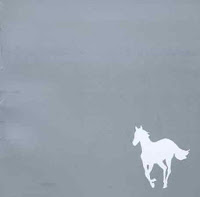 Having been caught doing maths in music class, Susan Omand has been given detention and yet another list of albums to listen to in order to further her music education. This time she rounds up a White Pony from Deftones...

Finally! A band I’ve heard of – Deftones. For the life of me though I can’t remember where from or why. No matter, I’ve heard of them and that’s enough. What? It’s not enough? Oh, ok then.

White Pony, as an album, reminds me strongly of the Seattle sound popular in the early 90s. I know I’m going to make a lot of enemies in both camps with that statement but there it is. It has the lazy guitars and the whiny vocals that bands like Nirvana made their own.

On first listen, it felt like the first track, Back to School (Mini Maggit), doesn’t really fit with the rest of the album in tone. So much so that I went investigating to see if I had a “deluxe” edition or a re-release because the prog-rock-ish flow from the second track Feiticeira to the last, Pink Maggit, is really cohesive and Back to School felt tacked on and, lo and behold, it was tacked on by the marketing gods. Why? I guess the gods had their reasons but it adds nothing to the album for me.

Also, this is an album where the shouty stuff doesn’t annoy me quite so much as usual. I don’t know if it’s because the desensitisation process that happened last time is still in place or because it’s all “just noise”. There are some interesting things about the music though, with unusual soundscaping in Digital Bath and Passenger, a glorious, almost acoustic, feel to the start of Teenager and the middle of Knife Prty wanting to be a Pink Floyd track, even though it doesn’t quite get there.

My favourite track on the album has to be Rx Queen though. The bend on the guitar is just sublime and the whispery shouts add a lot of interest. I also really like the “fell over the dustbins” percussion (a description borrowed from a friend, but it is very apt here).

So am I educated? Well, yes-ish. At least I can now say that I’ve now listened to the band, even though I can’t remember where I heard of them from.