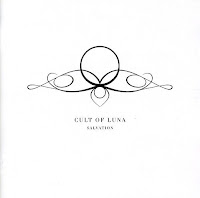 Having been caught doing maths in music class, Susan Omand has been given detention and yet another list of albums to listen to in order to further her music education. This time she howls at the moon with Cult of Luna's Salvation...

My ever-festering dislike of RAAAAAAR singing has been very well documented in this Educating Omand strand as it seems to be something that my esteemed teachers enjoy and I just… don’t. So, when Mr Sambrook forewarned me that Cult of Luna was “by far the heaviest and shoutiest thing” on my Detention list, I must admit to being apprehensive. And that apprehension coloured my listening for the first about four times that I listened to the album. Yes four. I was determined to get to the bottom of what was so great about this RAAAR stuff.

On the fifth listen, though, something happened. Something strange. I stopped hearing the RAAAR. Don’t get me wrong, I didn’t start enjoying the vocal, or even appreciating why it was there. It’s more like my brain decided to treat it like an annoying white noise and just tune it out and ignore it. It physically disappeared from my ears. I wonder if this is the case with everyone? The more you listen to the noise, the more desensitised you become so the more it disappears? Anyway, with this new-found selective hearing I listened to the album again and...

As an instrumental album this is superb! Track one, Echoes, has almost an Arabian bazaar sound to it with a melody that could easily transpose onto a Jirba or other reeded pipe. Put this over the rich drone of one of the heaviest basslines I’ve heard in a while and it’s glorious.

The intro to track two, Vague Illusions, actually reminds me of Status Quo in their hard rock 1970s days. I kept expecting it to kick into Whatever You Want. However, sadly, it didn’t but it was still very interesting musically with the melody shifting between the front and backline and the percussion was superb. Also an exciting use of changing time signatures, sirens and silence. And then half way through you get a complete change of tone that it’s almost like a different track (it’s not, I checked) and a very haunting melody suspensefully builds back up before such a quiet end that you are left on the edge and it could be no other way. Quite superb.

This leads into track three, Leave Me Here and another really good and heavy bassline. I really like the use of the B to lower A to upper G jump to give an atonal feel (in the same way that Killing in the Name Of by RatM has to keep you off balance) and then they go and through in a seriously 90s emo sounding melody (and listenable vocal!) that wouldn’t be out of place on an album by The Cult. Very clever.

Track four, Waiting For You, has a wonderfully laid back start where the guitar bumbles along being dragged along by a nicely crisp snare/hi-hat beat. It has an almost jazz/blues feel to it and lulls you into a false sense of security with a sublime minor key. Then the bassline starts to creep in and brings a real smile of satisfaction as the track does what it should do. There is no tension, no suspense, no edge, just deep, dark richness as layer upon layer of first guitar then synth is added. Just glorious.

Adrift is track five and probably the grungiest sounding of them. There’s an interesting use of time signatures and percussion breaks to throw the listener off balance and clever stereo use that isn’t so evident in the other tracks.

White Cell comes next and has a spectacular minor chord progression in it that drops into darkness. It’s also got some fascinating soundscaping over a simple backline that builds a lot of atmosphere very easily. That almost solo bass guitar in the middle is utterly sublime and I can just imagine it live and loud – virtual brown note.

The penultimate track, Crossing Over, starts so lightly it’s almost the antithesis of the previous one. The guitar bends are beautifully melancholy and there’s a real Celtic feel to the percussion. And again there’s actual singing on this one! Like proper tuneful singing. Impressive.

We finish up with Into the Beyond and more marvellous military snare under a walking bass. There’s an almost classical flamenco style to the guitar before the heaviness kicks up a gear. As the track goes on the addition of keys adds a sci-fi twist and it feels like it could be the theme to a film.

Looking back at the album as a whole, Adrift and Into the Beyond are probably my least favourites because, although good, they are quite samey throughout, where the other tracks evolve more in their progression. When it comes to picking a favourite that is more difficult because I like them all for different reasons but I’d probably plump for Waiting for You as it’s the one that made me smile.

So am I educated? Yes, because I’ve now found a way to appreciate this style of music while ignoring the bits I have a problem with. Will I listen to Cult of Luna again? Probably not but, hey, you can’t have everything.