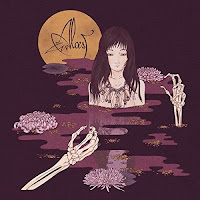 Having been caught doing maths in music class, Susan Omand has been given detention and yet another list of albums to listen to in order to further her music education. This time she gets roared at by Japanese forest spirits, in French, with Kodama...

What is it with you young people and this RAAAAAAR “singing” style? I really seriously don’t get it because it spoils what could have been a lovely album from a band I had never heard of called Alcest who, it turns out, are French. This will be important later.

Before we get to the RAAAR, and the proper music, an initial word about the album cover art. It is GORGEOUS! After much searching, I found out that it was done by French illustrators Førtifem, who are Jesse Daubertes & Adrien Havet (find out more about them on their website). For this album cover, I love the juxtapositions of life and death, air and water, young and old, and the inclusion of the Chrysanthemums (the Japanese monarchy sits on the Chrysanthemum throne) and water lily leaves (a symbol of purity in Buddhism) is genius, given that the initial inspiration for the album (yes, I have been doing my homework) is the anime Princess Mononoke from my favourite Studio Ghibli. Indeed that, too, is where the title of the album comes from as the kodamas are small woodland spirits in the film.

Anyway, before I get carried away on the art, onto the music. And the reason that I felt the fact Alcest were French was important is because this sounds more Gaelic than Gallic. The entente cordiale is definitely strong here as, had I not known who it was, I would have sworn it was an early 80s Scottish band – the likes of Big Country or even Runrig. It just has that Celtic folk-rock sound about it especially, bizarrely, in the odd numbered tracks. The first, title, track is amazing with striking guitar and an engaging build. It was also very interesting to hear the use of the pentatonic scale in the second track, Eclosion, given the oriental influences, and the vocal harmonies on track 3, Je Suis D’ailleurs, are almost ethereal. Both of these musical constructs are, however, overshadowed by much shouty noise as singer Neige's RAAR kicks in, thankfully absent on track 1. And that’s pretty much how the album continues; beautiful Celtic-rock music, clever, dark melodies with superb guitar, fascinating percussion use and voices which are treated as extra instruments, only to be overshadowed by incongruous roaring. It’s such a pity because it does physically put me off the otherwise superb album and I really don’t get why they felt it was necessary.

So, am I educated this time? Well, yes, but not necessarily because of the music, although the title track really is stunning. I’m educated because I now have the work of a couple of new art illustrators to look out for.