Turn That Noise Down - The Waterboys 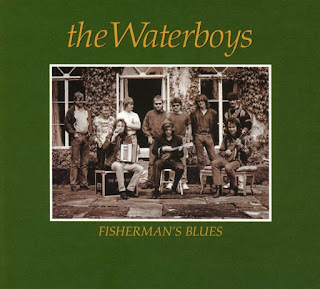 So many well-known albums turn 30 this year and Steve Taylor-Bryant and Susan Omand travel back to 1988 to revisit some of the sounds of their youth that made parents shout "Turn that noise down!" This week, Susan gets the Fisherman's Blues...

“It started up in Fife
It ended up in tears”

Those lyrics from the Waterboys’ song And a Bang On the Ear pretty much sum up my recent listen to Fisherman’s Blues. Oh the memories it brought back hearing the tracks again! I laughed and I cried, I stamped and I clapped, I danced round the kitchen and sang long forgotten songs at the top of my voice. What a superb album, why had I left it so long for another listen?

Deep down, I’m a bit of a folkie (don’t tell anyone) and The Waterboys have always featured high on my list but, for some reason, Fisherman’s Blues, although I played it a lot back in the day, somehow got left on the shelf and forgotten about as time marched on. It might be because this was their “first” album after a fairly radical change in sound from trying to be a rock band (yes it was them that did that student standard, Whole of the Moon, on their previous album This Is The Sea) to embracing their own roots a little bit more. So Fisherman’s Blues is a superb fusion of Celtic traditional music and instruments, both Scottish and Irish, with a splash of American country and some good old fashioned rock and roll. I guess that made it a bit more of an experimental album as well, too different for a lot of their rock fans but not yet found their audience in the folky world as they try out nostalgic strict tempo dance tunes like Jimmy Hickey’s Waltz alongside a spoken word narration of W B Yeats words over pan pipes in Stolen Child. Incidentally the much later Waterboys album An Appointment With Mr Yeats is also well worth a listen if you love his poetry. But back to this one and the instrumentation and talent of the band is evident, especially in both the highly complex Strange Boat and the contrasting We Will Not Be Lovers where the expressive fiddles almost become percussion, driving the rhythm of the song.

But the best thing about The Waterboys for me is, and always has been, Mike Scott’s voice. From the drollery of his own lyrics in Has Anybody Here Seen Hank to his stunning cover of Van Morrison’s Sweet Thing to the strength of Woody Guthrie’s lyrics in This Land is Your Land, Scott’s vocal just holds the attention. It’s raw but mellow, rough but lyrical, and always just not quite square on the note but much the better for it. And I’m much the better too, for getting Fisherman’s Blues again.