Turn That Noise Down - The Traveling Wilburys 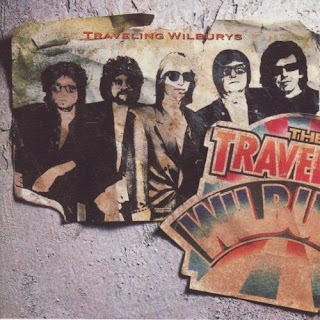 So many well-known albums turn 30 this year and Steve Taylor-Bryant and Susan Omand travel back to 1988 to revisit some of the sounds of their youth that made parents shout "Turn that noise down!" This week, Susan revisits Volume 1 of The Traveling Wilburys...

Oh, I miss The Traveling Wilburys.

And that surprises me somewhat. Thirty years ago, when this album came out, I was at an age when it was “not cool” to like them (and that still mattered). They were a band that your parents listened to, proper grown-up music, and I wasn’t ready to be proper grown-up enough to appreciate them. But now? Now…

In case you don’t know them, The Traveling Wilburys were five brothers - Nelson, Otis, Lefty, Lucky and Charlie T Wilbury Jr… at least that was the story. In reality, they were a supergroup made up of George Harrison, Jeff Lynne, Tom Petty, Bob Dylan and “The Big O” Roy Orbison. Just read that list of names again. Five of the most distinctive voices (and reclusive characters) in the music industry – this was never going to work, was it? Oh yes, it was.

There’s not a bad song on the album, nothing controversial, ground-breaking or show stopping, just good honest music with choruses you could sing along with and melodies to make you tap your feet. Each track was written as a group, lead vocals shared out equally between the five of them as egos were set aside, and it’s those distinctive vocals that make these songs shine, being instantly recognisable, both separately and together; the harmonising of Tom Petty and Bob Dylan in Handle With Care is a sound like no other, off key, rough as hell but exquisitely matched. There’s also a real diversity of styles throughout the album that match their own individual brands, from the poppy Margarita, that starts off like ELO playing the Top Gun theme, and the protest-song style of Tweeter and the Monkey Man, to the good old-fashioned rock and roll of Rattled and Congratulations which could only ever be a Harrison track, even though it is sung by Bob Dylan. There’s even a reggae sound to Last Night that didn’t “belong” to anyone but works ever so well. It’s everything you could ever want from a supergroup.

There was one follow-up album, Volume Three (not a typo - blame George Harrison who allegedly said “Let’s confuse the buggers”), a couple of years later which was dedicated to the memory of Lefty, as Roy Orbison died not long after Volume One came out, but it never quite hit the same heights this first one.

So, now, thirty years on from the release of Volume One, I find myself appreciating this album a whole lot more than I did at the time. I’m now grown up enough to be ready to go travelling with the Wilburys. Trouble is, they reached the end of the line a long, long time ago.