Turn That Noise Down - Duran Duran 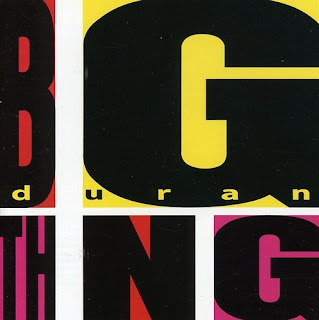 So many well-known albums turn 30 this year and Steve Taylor-Bryant and Susan Omand travel back to 1988 to revisit some of the sounds of their youth that made parents shout "Turn that noise down!" This week, Steve makes a big thing about Big Thing...

Big Thing or "Duran Duran turns dance music tribute act" is a mixed bag for me. I’ve never been ashamed to admit my love for Le Bon and his band of merry musicteers but there’s something about Big Thing that just doesn’t sit right with me. I think it’s that, instead of doing their own thing and blazing a trail through music like they had done their entire career, they decided instead to follow a trend. The problem is dance music is full of different styles and, whilst I imagine Nick Rhodes could program and produce dance music of the highest order, it just doesn't work with the rest of the band attached. After their hiatus they had come back two Taylors down, with Andy and Roger not returning, but produced Notorious which was a funk pop slice of wonderful and showed a band forging ahead in a great direction that suited the musical tastes and sensibility of the three remaining core members. Notorious had shown Rhodes was more than just a keyboard player in a New Romantics band, Le Bon’s vocals had a more mature and dare I say tuneful feel, and Notorious had shown the world just what a bloody talented bass player John was. I was excited in 1988 to see how they would follow up my favourite album since Seven and the Ragged Tiger but Big Thing was a big disappointment. I’m older now though, have a bigger breadth of musical taste and education so surely Big Thing would impress more on relisten? "Kind of" is the answer. I found myself enjoying tracks I truly had hated back in my youth, and some of the ones that had maybe led to a foot tap or a sing along thirty years ago were met with apathy.

The album opens with a trio of tracks that should be right up my Durany alley, Big Thing, I Don’t Want Your Love, and All She Wants Is. The problem is they sound like generic dance pop three minute radio jingles and whilst I may have bopped my head then I shake it dispirited now. Now, these songs sound like a band with direction, no clue, just fighting to stay in the public eye. They are Duran Duran they don’t need to fight! Palamino and the wonderful Do You Believe in Shame are saving graces on a record that is shambolically put together. The two musical interludes are pretentious tosh, and there’s very little I truly admire on the entire release.

A greatest hits record would follow this, which is normally a death knell to any band but 1990’s Liberty would rescue my love of the lads and ‘93s Duran Duran, more commonly known as The Wedding Album, would relaunch the band as a worldwide music force once again. So the lesson with Big Thing is? Don’t, let’s just jump to 1993.