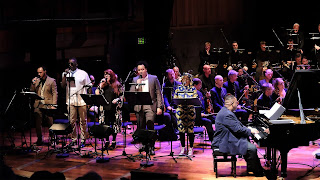 Tony Cross went to a World Premiere recently at London’s Southbank Centre. Here's his thoughts on a jazzy new production of the classic saga of Tristan & Isolde...

The story of Tristan & Isolde is an old one. Dating back to 12th century Anglo-Norman romances grown from older Celtic legends. It’s probably the story that got a re-boot in Arthurian legend as the story of Lancelot and Guinevere. The best-known musical version of it is – probably – Wagner’s opera, which is a solid four hour plus long (and – based on my single experience of seeing it at the ENO in 2016 – it is rather impressive.) That might even be the best-known version of the story full stop. Unless there’s a huge fan base out there for the 2006 film starring James Franco and Sophia Myles that I am not aware of.*

This version with music by Julian Joseph and libretto by Mike Philips is a whole different kettle of fish. It’s a jazz-classical fusion. Now, before we go any further I have to say a few words about why I was at the Queen Elizabeth Hall to see this.

I had no idea who Julian Joseph was. I stand on the edge of a large chasm of ignorance when it comes to jazz as a genre. I know names. I have a handful of albums, but when it comes to contemporary jazz my knowledge is pretty much zero. So, why was I here? Well, I saw this in the listing for the Southbank Centre and thought it sounded interesting. I knew the Wagner opera and I was interested in seeing an alternative take on it. This I know makes me privileged. I have the advantage of living in London, with its myriad cultural attractions and venues, and having – now – a degree of financial independence. Plus, I don’t have anyone else to stop me spending two hours and twenty minutes taking a gamble on a cultural event.

And I’m glad I did. It was an enjoyable experience.

The music came from a mixture of the BBC Concert Orchestra, conducted by Clark Rundell; the BBC Singers; members of the Julian Joseph All-Star Big Band and the Julian Joseph Trio – which includes Julian Joseph himself on piano. The singers were Carleen Anderson as Isolde; Ken Papenfus as Tristan; Christine Tobin as Iuliana (and Brigid), Renato Paris as Marko and Cleveland Watkins as Vasile.

It’s interesting listening to how the different instruments, voices and styles work together. Sometimes they stand out – Jerry Brown’s drum solo or Mark Hodgson’s double-bass solo for example – but mostly they work together. Weaving around each other, driving each other on and making interesting patterns.

Whilst I was watching I found myself amazed once again how many ways human beings have come up with to make music. Not just their own voices but various wooden boxes with strings, metal tubes that get twisted or expanded, wooden tubes with holes (or keys) etc. And the even more miraculous results that come when they work together.

This version of the story is set in contemporary Britain – and Romania. Marco is a gangster Lord in the Carpathian Mountains. Tristan is an African who was orphaned and bought up by Marco. Isolde is a Romanian bought up in London by her mother, Iuliana. Like the musical version of Twelth Night I saw at the Young Vic this is a multi-cultural world, which – for me – is the best kind of world. As great music is made by the mingling of many different instruments making many different noises, so a better world can be built on a multi-cultural platform: diversity is strength.**

The music is great. I loved Joseph’s piano playing – and I’ll be listening to Joseph’s other music, so if nothing else listening to this has broadened my musical horizons a notch*** – but the singing was fantastic.

In the last couple of weeks, I’ve heard people singing opera, ‘West End Musical’ and Jazz styles. It makes for an interesting exercise. However, Carleen Anderson’s voice is something else. She’s got range and depth. I could have listened to her all night. But all the singers were great. Ken Papenfus smooth as silk; Christine Tobin, Renato Paris and Cleveland Watkins, whose cuckoos were a swinging joy.

So, to conclude this long and rambling road I really enjoyed this. It proves to me that taking a dip into the cultural ocean, even if it is a bit you don’t know very well, can be massively rewarding. It’s a chance everyone should have. The things we label ‘high culture’ should be accessible to everyone. Opera shouldn’t just be an expensive entertainment for the London glitterati. The theatre shouldn’t be a gradually pricier and pricier experience or restrict those who can’t afford it to the cheap and uncomfortable seats with their restricted views. And neither should things like this.

I’m a lucky man. I get the chance to see this stuff. So should everyone else. You never know what happen. This all costs money, of course. But it is a good way to spend money and it pays off. Creativity creates creativity. Who knows who might be out there waiting for the spark that lights their fire that then lights our fire.


*There’s not.
**A little bit of politics there. My name’s Ben Elton. Good night.
*** Indeed, I’m writing this review to the sounds of Julian Joseph’s 1991 album ‘The Language of Truth’.


Image - BBC Concert Orchestra Facebook page
You can find audio of the whole performance for a limited period on BBC iPlayer at https://www.bbc.co.uk/programmes/m0000nlj
Email ThisBlogThis!Share to TwitterShare to Facebook