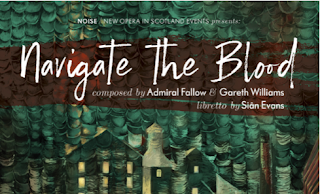 A new opera - Navigate the Blood - will be performed in distilleries across Scotland next month...

In a powerful new partnership, the top Scottish indie-folk band, Admiral Fallow, has joined forces with composer Gareth Williams, pushing their collaborative boundaries in new creative directions to create the music for this opera. Working with classical opera singers, they have embraced an intense writing process, resulting in an exciting first new work of modern opera by these talented and versatile musicians.

The story is set in a small family distillery about a couple whose son has disappeared in mysterious circumstances. Touring to regions where there is no accessible opera house, Navigate the Blood will give many people an opportunity to see live opera for the first time.

Distilling is an industry that employs, directly and indirectly, 41,00 people in Scotland. The last ten years have seen a growth not only in the distilling of whisky but also a massive increase in the production of gin, with 70% of the gin being produced in the UK now being distilled in Scotland. Two million tourists visited Scottish Distilleries last year.

Told against this background of industry and employment, this new production of singing, music, theatre and storytelling has been created to reflect the lives of the distillery communities in Scotland.

This ambitious tour has been made possible by the support of Creative Scotland and is designed to welcome, engage and entertain new audiences for opera across the country.

Alan Morrison, Head of Music, Creative Scotland said: “NOISE is one of the boldest contemporary music companies in Scotland, and Navigate the Blood is a great example of how they break down barriers when it comes to opera. Not only does this production get out of the concert halls and into the communities, making Scotland’s distilleries the subject and the setting of each performance, it bends the rules of composition, with top-class classical talent collaborating with one of the country’s most musically ambitious bands. This is an inventive, exciting way to bring opera to new audiences, and Creative Scotland is proud to raise a glass to that.”