News - Musicals at the Cinema 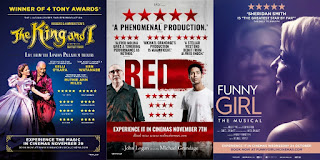 Feel like you're missing out on musical theatre because you don't live in London? Trafalgar Releasing brings a trio of hit West End productions to cinemas around the world over the next few weeks...

THE KING AND I: FROM THE LONDON PALLADIUM

Set in 1860s Bangkok, the musical tells the story of the unconventional and tempestuous relationship that develops between the King of Siam and Anna, a British schoolteacher whom the modernist King, in an imperialistic world, brings to Siam to teach his many wives and children.

To find out more visit: www.kingandimusicalcinema.com

With music by Jule Styne, lyrics by Bob Merrill and book by Isobel Lennart, the Broadway smash which skyrocketed Barbra Streisand to stardom, was revived with Sheridan Smith playing Fanny Brice, who rose from the Lower East Side of New York to become one of Broadway's biggest stars under producer Florenz Ziegfield.

To find out more visit: www.funnygirlincinemas.com

Filmed at the Wyndham's Theatre, where it completed its run on Saturday, July 28, 2018, the production is based on Grandage's original 2009 Donmar Warehouse production, that went on to win six Tony Awards including for Best Play and Best Direction of a Play.

Under the watchful gaze of his young assistant, and the threatening presence of a new generation of artists, Mark Rothko takes on his greatest challenge yet: to create a definitive work for an extraordinary setting.

To find out more visit: www.redincinemas.com