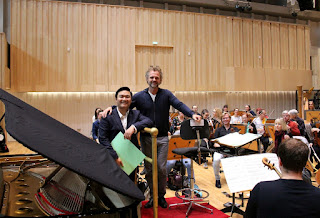 Less than a week after the BBC Philharmonic announce their new Chief Conductor, The RSNO have announced the appointment of a new Assistant Conductor...

Currently based in Berlin, Junping Qian will join the orchestra as Assistant Conductor for 23 weeks in the season. He will conduct a variety of the RSNO’s concerts and play an active role in engaging audiences and communities throughout Scotland. In addition to many conducting opportunities, the RSNO’s Assistant Conductor will primarily work in a supportive mentoring and learning environment, through ongoing professional evaluation and guidance from RSNO Music Director Thomas Søndergård, Principal Guest Conductor Elim Chan and player-mentors in the Orchestra. Furthermore, Junping will have the opportunity to work with many guest conductors, and develop the multi-faceted leadership, organisational and public address skills required of modern conductors.

The RSNO Assistant Conductorship is a two-year post and benefits from the support of the Solti Foundation. The scheme is a rare opportunity for conductors keen to develop their talent and experience. Previous post-holders have found their time with a major symphony orchestra significantly improved their career prospects. Former Assistant Conductors have gone on to lead major symphony orchestras. Christian Kluxen is signed to major international artistic agency Hazard Chase and David Danzmayr is now Music Director of Ohio’s ProMusica Chamber Orchestra and Chief Conductor of the Zagreb Philharmonic Orchestra. Junping Qian succeeds Holly Mathieson, who concluded her term as Assistant Conductor in June 2018 and is now signed to InterAlia.

RSNO Music Director Thomas Søndergård said “It gives me great pleasure to welcome Junping to the RSNO family. The standard of applications for this position were incredibly high, but Junping’s application, including his audition conducting the Orchestra, presented everything that we were looking for. We are really looking forward to working with Junping. In the coming years he will play a vital and rewarding role in the musical life of Scotland.”

New RSNO Assistant Conductor Junping Qian added “I am incredibly humbled, honoured and excited to be taking on the position of Assistant Conductor with the Royal Scottish National Orchestra. With the calibre of conductors who regularly work with the Orchestra, the variety of repertoire and the hands-on nature of this role, this is rightly considered one of the most sought-after assistant conductor positions in the world. I will do my best to help the organisation in whatever way I can, and am very much looking forward to working with Maestros Thomas Søndergård and Elim Chan for the next two years, as well as the fantastic musicians of the RSNO."

Watch the man himself in action here, in the Final round of the Bucharest International Competition from last year. And this after only 20 minutes rehearsal time, just think how good he will be for his concerts!