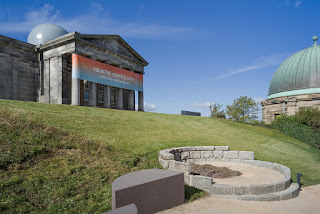 Collective - a new centre for contemporary art - will open in Edinburgh on Saturday 24 November 2018 after a major restoration project in partnership with City of Edinburgh Council at one of the capital’s major World Heritage sites...

Situated on top of Calton Hill, overlooking the city, Collective will include the restored City Observatory, designed by William Playfair in 1818, a new purpose-built exhibition space with panoramic viewing terrace, and a destination restaurant, The Lookout by Gardener’s Cottage. For the first time in its 200-year history the City Observatory site will be freely open to the public.

Kate Gray, Director of Collective, said “After more than five years of fundraising and hard work it’s incredibly exciting to be opening our doors to visitors at last. Collective is situated in a very special location on Calton Hill and we hope to offer our visitors an equally special experience, combining extraordinary art and architecture with panoramic views of the city. We now extend a warm welcome to residents of Edinburgh and visitors to the city and invite them to come up and see us.”

The opening marks a fresh chapter in the history of the Observatory site and for Collective, an organisation active on the Scottish arts scene since 1984. Collective will position itself as a new kind of observatory, inviting the public to view the world around them through the lens of contemporary art.

A selection of international and Scotland-based artists, commissioned specially for the opening, will exhibit their work at Collective as part of an inaugural exhibition. Affinity and Allusion will draw on themes connected to Calton Hill’s rich history and will feature the work of artists Dineo Seshee Bopape, James N Hutchinson, Alexandra Laudo, Tessa Lynch, Catherine Payton and Klaus Weber.

The City Observatory, designed by William Playfair in 1818, played a key role in the history of astronomy and timekeeping in Edinburgh. Now restored to Playfair’s original designs, the Observatory will open fully to the public for the first time. The original telescope, installed in the Observatory in 1831, will be on display. The Observatory will also house Collective’s new shop, Collective Matter, selling unique artist editions and specially commissioned products.

The Hillside is a brand-new exhibition and office space embedded in the hillside in front of the City Observatory. The space will primarily exhibit work from Collective’s Satellites Programme for emerging artists and producers in Scotland. A panoramic viewing terrace on the roof of The Hillside will allow visitors to soak up the stunning views north across Leith and the Firth of Forth. The nearby City Dome, completed in 1895 as a subsidiary to the main Observatory, has been restored and will play host to a changing programme of international artists showing their work in Scotland for the first time.

A purpose-built restaurant, The Lookout, has been constructed on the northeast corner of Collective and will be managed by local partners The Gardener’s Cottage. The Lookout will specialise in seasonal cooking using locally-sourced ingredients. Panoramic views from the upper floor dining area, which is cantilevered to partially oat above the hillside, will complete an extraordinary dining experience.

The final building to be restored as part of Collective is the Transit House. Originally used as an observatory, the building will now serve as a learning and education space for visiting schools and groups. The original ‘Politician’s Clock’, so-called because it has two faces, will be back on display. Before the installation of the time-ball in the nearby Nelson monument, sailors from the Port of Leith would ascend Calton Hill and use the clock (accurately set by celestial observations) to set their chronometers.

Councillor Donald Wilson, Culture and Communities Convener, City of Edinburgh Council said: “Gazing over the city from the top of Calton Hill, the City Observatory has played an important role in Edinburgh life for hundreds of years. Now it is set to become one of the most unique ‘must visit’ destinations in all of the city.

The building is a historically significant symbol of the Edinburgh Enlightenment as well as a major contributor to the history of star gazing. It’s a brilliant example of Scottish architecture – an original Playfair design – and boasts a prominent position on the Edinburgh skyline with panoramic views of the Firth of Forth, Arthur’s Seat and Edinburgh Castle. When it reopens, it is also going to be a space for people to enjoy the arts and for the public to visit freely.

I am delighted that we have been able to support the project with significant investment from the Council and many years of collaboration with Collective. It is surely one of the most significant conservation projects to take place in Edinburgh in recent times.”