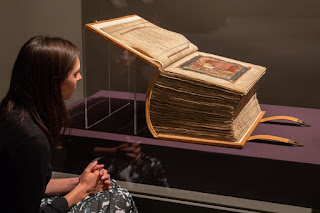 Anglo-Saxon Kingdoms: Art, Word, War is now on at the British Library in London...

The exhibition, the largest ever on the history, literature and culture of Anglo-Saxon England spanning all six centuries from the eclipse of Roman Britain in the 5th century to the Norman Conquest of 1066, presents a once-in-a-generation opportunity to encounter original evidence from the Anglo-Saxon kingdoms, a time when the English language was used and written for the first time and the foundations of the kingdom of England were laid down.

Bringing together the British Library’s outstanding collections alongside exceptional loans, exhibition highlights include:

Codex Amiatinus (pictured above), the earliest surviving complete Bible in Latin made at the monastery of Wearmouth-Jarrow in the north-east of England in the early 8th century and taken to Italy in 716 as a gift for the Pope. It will be returning to England for the first time in more than 1300 years, on loan from the Biblioteca Medicea Laurenziana in Florence 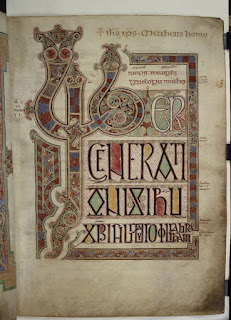 Outstanding illuminated and decorated manuscripts, including the St Augustine Gospels on loan from Corpus Christi College Cambridge, the Book of Durrow on loan from Trinity College Dublin and the Echternach Gospels on loan from the Bibliothèque nationale de France, on display with the British Library’s Lindisfarne Gospels, and the Utrecht, Harley and Eadwine Psalters from Utrecht University Library, the British Library and Trinity College Cambridge respectively 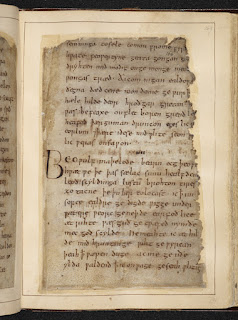 The four principal manuscripts of Old English poetry on display together for the first time, with the British Library’s unique manuscript of Beowulf displayed alongside: the Vercelli Book returning to England for the first time from the Biblioteca Capitolare in Vercelli; the Exeter Book on loan from Exeter Cathedral Library; and the Junius Manuscript on loan from the Bodleian Library 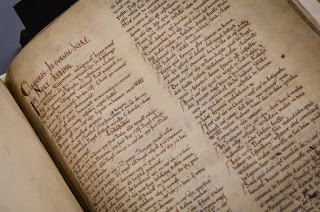 Domesday Book, the most famous book in English history and the earliest surviving public record, on loan from The National Archives; it provides unrivalled evidence for the landscape and administration of late Anglo-Saxon England 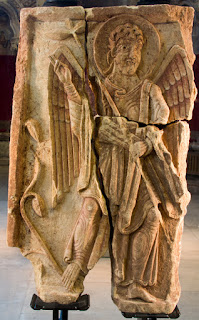 A number of recently discovered archaeological objects including the Binham Hoard,the largest collection of gold from 6th century Britain, on loan from the Norfolk Museums Service; the Lichfield Angel, which has never been displayed outside of Lichfield since it was excavated in 2003, on loan from Lichfield Cathedral; and key objects from the Staffordshire Hoard, discovered in 2009, the largest hoard of Anglo-Saxon gold ever found, on loan from Birmingham Museums Trust and the Potteries Museum and Art Gallery; 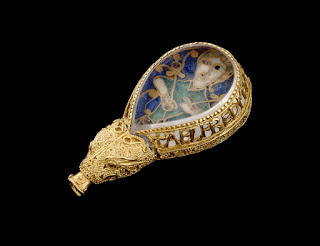 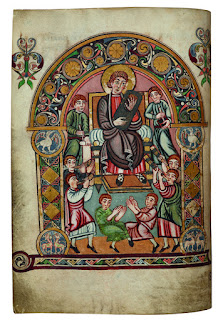 The River Erne horn, a wooden trumpet from the 8th century discovered in the river in the 1950s on loan from National Museums Ireland, will be displayed for the first time alongside the Vespasian Psalter, which includes the oldest translation of part of the Bible into English and depicts two musicians playing similar instruments 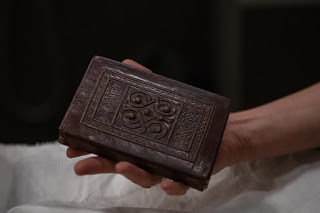 St Cuthbert Gospel, the oldest intact European book with its original binding, made at the monastery of Wearmouth-Jarrow in the north-east of England in the early 8th century; it was acquired by the British Library in 2012 following the Library’s most ambitious and successful fundraising campaign for an acquisition.

Through archaeological objects, unique charters and manuscripts, some of which are returning to England for the first time, the exhibition will feature famous figures such as King Alfred the Great and King Cnut, and it will reveal a highly developed culture, deeply connected with its European neighbours, from Ireland in the west to the eastern Mediterranean.

From stunning illuminated manuscripts to the earliest surviving will of an English woman, Anglo-Saxon Kingdoms: Art, Word, War will highlight the key role manuscripts played in the transmission of ideas, religion, literature and artistic influences throughout England and across political and geographical boundaries, as well as the sophisticated skill and craftsmanship of the artwork produced at this time.

Dr Claire Breay, Lead Curator of Anglo-Saxon Kingdoms: Art, Word, War at the British Library, said, ‘This is a once-in-a-generation opportunity to see an outstanding array of Anglo-Saxon manuscripts and objects produced over six centuries, which demonstrate the sophistication and interconnected European world of Anglo-Saxon art, literature and history.’

There will be a varied programme of events comprising discussions, lectures and music performances, inspired by the exhibition, which can all be viewed on the Library’s What’s On pages. A learning programme, including school workshops, teacher events, family activities and adult courses, will also accompany the exhibition.

The British Library has made its outstanding collection of Anglo-Saxon manuscripts and charters available online in full, allowing people around the world to explore them in detail, and to support future research in the field.