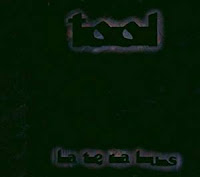 In an effort to further her musical education, Susan Omand has been set "homework" of listening to albums released after the 1980s that she has missed out on. This time, for extra credit, it's Tool and Lateralus...

I have to start with an apology. “I’m sorry, Mike. I tried. Really seriously, I tried. That’s why there’s been such a delay in writing this article – that was me. Trying.”

But, far from my chakras being aligned by listening to Tool’s “seminal” album Lateralus, as I was promised by the Madius comics guru that is Mike Sambrook, instead I found that my chakras kept getting bored and wandering off about half way through so it took me a long time to get to the end of the album.

I can kind of see what Tool are trying to do with this album, with their epic soundscaping that travels round your headphones and massive contrasts in sampled vocals counterpointing with slow build instrumentalism but it’s all a bit incense scented and tie-dyed isn’t it? What I mean by this is that it’s trying too hard to be ubercool, studenty hip without bringing anything new to the table. And I think that’s the problem. I grew up listening to Rush, Marillion and Pink Floyd. Then I went on to Tangerine Dream, Van Der Graaf Generator and Fripp & Eno, with side orders of Aphex Twin, The KLF and The Orb. That’s a fairly imposing prog rock/ambient table to try to bring anything to. So maybe I’m judging them unfairly.

Trying to be objective about the album, there’s nothing wrong with it. There’s a lot of distorted guitars and clever ploity noises, shimmering cymbals in among the drums and angsty samples intermingled with monotonic chanting vocals. Reading more about them, there’s some nice stuff going on behind the scenes with Fibonacci sequencing, descending time signatures and, randomly, slowed down noises of somebody hugging their cat… oookayyy. But all that “clever” doesn’t really come through in the music unless you know about it. Eon Blue Apocalypse is probably worth listening to again (but only because the start of it reminds me of Canned Heat’s On the Road Again), Ticks and Leeches is, well, “imagine jazz improv being played by a thrash metal band” enough to get some attention and Faaip de Oiad is suitably art installation. But. And it’s a big but. It’s all been done before and better by other people. Sorry.