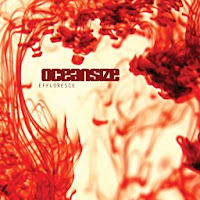 Having been caught doing maths in music class, Susan Omand has been given detention and yet another list of albums to listen to in order to further her music education. This time, her spotlight shines on Effloresce by Oceansize...

Oceansize is a band that I know nothing at all about, not even what kind of music to expect so that, along with the fact of being told that this was one of Mr Sambrook’s favourite albums, has really heaped the pressure on. So let’s go track by track for my first listen.

I Am The Morning provides a gentle instrumental start to the album that floats along with a singular melodic theme until the bridge about half way through when the guitars are heaped on in buckets, really adding depth and breadth to the song. A strong start, even with the tinkly bells.

It annoys me though that the next track Catalyst didn’t take the theme and build on it more as I had expected it would. The abrupt change really pulled me out of the ambient mood but I guess I was lulled into that false sense of security at the start. As a result I’m really not sure what to make of this track as it really is a bit all over the place and the dichotomy of noise and ambience irritates rather than interests. It may be a grower (but I doubt it).

One Day All This Could Be Yours has a very X-Filesy start and reminds me a lot of the work of Mark Snow. I like the sci-fi sound, the over-processed vocals and the slow build in it until the suitably metal bass kicks in and it gets heavy while still retaining the initial theme that harks back to track one. This is my favourite so far.

Massive Bereavement is, well, massive at nearly 10 minutes in length. I love the soundscaping at the start and the layering of the guitars is beautifully done. It could really have done without the vocals though.

A quick time-out to mention the vocals because, unaltered, they do really annoy me. It’s all very whiny and off key. Very “grunge” I suppose they would call it in the vernacular. Yes, I know quite often I say that some of the not-quite-but-nearly singers I listen to are brilliant but, in this case, it sounds like they’re not even trying to be one thing or the other. Do it or don’t do it, either way, put some effort into it, ok?

And that’s really a pity because the rest of the track is very interesting musically. The guitar distortion is amazing and adds to the complexity of the track without becoming “noise”. Also, nice use of drum fills.

Rinsed is another instrumental and is beautifully evocative. It’s how blues would sound if they had just invented it now. There’s Pink Floyd moments in the instrumentation and it really does just float you away. New favourite on the album.

You Wish is next and sounds very commercial and almost conventional compared to the rest of the album. Sorry if that’s damning with faint praise, it’s not bad, just meh. Again the whiny vocal is back, again we get the trundly start that lifts into a heavier second half of the track but this time it’s not new and different, which is a real disappointment. It also can’t quite decide when to stop.

Remember Where You Are has an interesting percussive start and makes good use of staccato rhythms in the chorus. Economic use of silences always create impact. That voice is still very annoying though, even though the close harmonies are impressive, especially as they manage to harmonise off key too. And this tinkly piano meandering completely contrapuntally over the last 40 seconds or so is brilliant.

Again with another abrupt track change. It kinda sounds like we dropped straight into the middle of this song but that could be utter artistic genius, considering the track is called Amputee. Also superb guitar work and creative use of the wah-wah pedal (do they still call it a wah-wah pedal?) in the middle and I like the edginess of the repetitive high notes. Again, it’s just the vocal that knocks this down to being “more of the same”.

The piano at the start of Unravel is amazing! It has an almost classical feel to it. The layering of electronica and the constancy of the repeated phrasing is hypnotic, like a ticking clock or dripping tap. Definitely a second-favourite on the album, which is telling because this is another instrumental.

Women Who Love Men Who Love Drugs is the title of the next one. The Spanish guitar strum in the first section is innovative and almost percussive. Other than that, it feels like it follows the same formula as the other tracks, the soft to loud thing, although the unexpected distorted choral work at the end adds an ethereal effect to soften the sound again.

The start of Saturday Morning Breakfast Show is another of these soundscapes that these guys seem to be so good at. Nice build on it with the additions of rhythm. And I’m going to make an admission here – this time the vocals work for me. I think it’s the deliberate laziness of the backing that makes the voice “fit” better. It’s got a really languid, sleazy feel with the use of minor key and it’s a pity that it only lasts half way through the track before their (I guess signature thing now) shift into a heavier gear. I could have done without it this time, even if it did really remind me of Led Zeppelin's Immigrant Song, because I definitely prefer the slower sections of the track.

Final track on the album is Long Forgotten and the cello at the start is absolutely beautiful, balancing so well with the stark lead guitar and the ticking rhythm guitar. Fascinating drums in the background as it gets going and this time, finally, this time, it doesn’t kick up into a heavier song, although it does add a lot of layers. But it manages to remain atmospheric with a walking bass and atonal keys underneath the guitar and strings, tailing off to cicada-like radio chirps which is a brilliant way to end.

Overall verdict? The instrumentals, and instrumental sections, are much better than the vocal bits and were the stand outs for me. It’s an album that I’d have on in the background while I was doing something else because it’s all a bit samey to listen to all the way through as a fully concentrated sitting, at least sober. Which may make the difference. However, you can consider me educated to the extent that this is a band that I hadn’t even heard of, never mind listened to, before. Would I seek them out again though? Hmmm, unsure. Sorry sir.