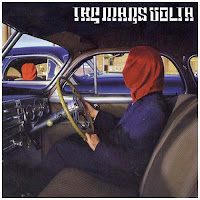 Having been caught doing maths in music class, Susan Omand has been given detention and yet another list of albums to listen to in order to further her music education. This time she shouts from the rooftops about Frances the Mute...

Well, you certainly won’t doze off during this album! I hadn’t heard of these guys before but, as always, Mr Sambrook has thrown something thought-provoking at me (other than the blackboard duster) for Detention.

The first track, Cygnus Vismund Cygnus starts off in a way that I can only describe as “The Darkness sings Jethro Tull” but it soon gets over itself and kicks into a fast and heavy sound that really reminds me of Wolfmother. If you haven’t listened to Wolfmother’s first album btw you really should! But this track isn’t done with surprises yet, throwing a really laid back guitar break into the mix that is very acid jazz-like but then it devolves into what is known in the trade as “a bit of a noise” – very interesting but challenging and very incongruous to what has come before as Foley samples overlay one another to create an atmosphere more than a melody Really this first track, at 11 minutes long, is four in one without anything linking them together other than the title. Still good though.

The next track is The Widow and it sounded very familiar so I went looking. Turns out it was in an episode of Rescue Me, the TV series where Denis Leary was a firefighter, so that explains where I know it from. I must admit though, I think the TV series version stopped before it sounded like the tape was getting eaten by the cassette recorder for the last 2 minutes or so.

L’Via L’Viaquez is next with a real Latino, Miami Sound Machine, sound, as you would expect from the title and I adore the sudden drops in tempo from funk to rumba and the heat of a classic Santana track before a pick up that is as abrupt as the drop. Then about half way through it loses it completely with the most amazing percussion break before we’re back to the languid rumba rhythm. I’m not sure about the “underwater” vocals but the instrumentation, especially the drums and the piano, is superb.

Then we come to the wonderfully named Miranda That Ghost Just Isn’t Holy Any More and an intriguing start that reminds me a lot of The Orb with its ethereal soundscaping and there's a full five minutes of this atmospheric build before the brass kicks in. Yes, brass! Now, I’m a sucker for brass used in music at the best of times but here, it’s just stunning. Like proper Mariachi stuff and it just gets better when the vocals kick in. I have to take a moment to talk about “that voice” – Cedric Bixler-Zavala is a new god. From rich tenor, to gloriously controlled falsetto, his unique vocal style is an instrument in itself and is a sound that I will never tire of listening to. So there. Favourite song of the album, definitely.

A vicious jolt out of the wowness (yes, it’s a word) of the previous track and a Zeppelin-esque thrash through the start of Cassandra Gemini. The midpoint goes very sci-noir with a computerised voice over before continuing the story with more brilliant brass and cracking percussion.

This flows straight into Tarantism and we’re back to a Wolfmother sound that just makes me smile. I’m now getting used to how the band works and those moments of “a bit of a noise” that I referred to earlier are the absolute jewels in the artistry of these songs, used just enough to jar the listener out of a false sense of security but not enough to become irritating.

Another straight flow into something called “Plant a Nail in the Navel Stream” and it feels like a natural augmentation of what came before, in the way that it should have maybe been part of the previous track by fitting together better than those disparate parts of the track one.

Faminepulse builds on even more bells and whistles, well synth and guitar, and picks up a repeating phrase that runs as an undercurrent through the whole track as different instruments pick it up and pass it around. This has a real jazz feel to it because of that as everyone improvises around the other. Or so I thought. On further reading I found out that each musician recorded his part separately, playing only to a metronome, without knowing what the end result would work with and the construction of the track was left to record producer Omar Rodriguez-Lopez and that fact makes this whole album even more genius.

This is followed by an almost Pink Floyd “outro” of Pisacis, which picks up on the same repetition, holding it on the bass, as percussion and lead guitar play out over the top with some really interesting noises being produced by playing behind the bridge to get a marvellous tinny sound in parts.

The final “full track” (i.e. longer than a minute) is Con Safo and the brass section is really gie’ing it laldy (to use a Scottish term) I mean that sax is screaming. It’s amazing, if not entirely tuneful, to listen to.

Multiple Spouse Wounds and Sarcophagi round off the album at under a minute each but, to me, they don’t belong – I would say they don’t fit, but the whole album doesn’t fit in a way that really works, apart from these two “bits” that really feel like afterthoughts.

So am I educated this time? Oh. Hell. YES! This is a stunning album that really ticks all my proggy rocky boxes and the addition of jazz styling and bountiful brass as well as a superb vocalist is the icing on a very tasty cake indeed. There will definitely be further investigation into The Mars Volta.