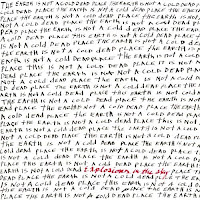 Having been caught doing maths in music class, Susan Omand has been given detention and yet another list of albums to listen to in order to further her music education. This time she discovers The Earth is Not a Cold Dead Place...

“Five tracks?!” I spluttered into my coffee as I read the back of the CD I had been given for this week’s Educating Omand: Detention. “Five tracks? Is that al… ohhhh.” The “oh” was because each track was roughly 10 minutes long. Undaunted (well, slightly daunted because what if I hated it? Ten minutes per track is a long time to pretend to concentrate) I pressed play and…

Dear internet world, WHY HAVE I NEVER BEEN TOLD ABOUT THESE GUYS BEFORE? What a brilliant album! I just love it.

This isn’t ambient music as I’m used to it. There’s very little electronica trickery going on, no soundscape building, whooshing noises and sampling. Instead you get an almost classical clarity of instrumentalism that just washes over you as it builds from the single repetitive notes of a simple melody at the start to something that sounds utterly orchestral by the end of each track. That’s not to say this is an acoustic album though, far from it, the electric guitar, in all of its guises, is very much the instrument of choice.

I’ve been wondering how to describe the sound, the feel of each of the five tracks on the album. The best that I can come up with for the first track, First Breath After Coma, is “Imagine Barrington Pheloung’s Morse soundtrack but played by Coldplay without the bland vocals of Chris Martin.” This is not damning with faint praise because Coldplay’s musicianship is brilliant (it’s the vocal that kills them for me) and I absolutely love Pheloung’s scoring. If track one reminded me of Morse, track two, The Only Moment We Were Alone, is very reminiscent of Vangelis’ Chariots of Fire but with guitars instead of keys and synth. Six Days At the Bottom of the Ocean is different again, with more percussion and a beautiful break in the middle that does indeed evoke an underwater feel without being overly electronic. Memorial is probably my favourite track on the album. The walking arpeggios of minor chords at the start are heart-achingly gorgeous, it brings tears to my eyes every time, and, when the heavy backline kicks in about half way through, there’s also a smile of absolute satisfaction at a track that does exactly what it’s meant to. Stunning work. Rounding the album off is Your Hand in Mine, and back to a very staccato classical guitar feel at the start of the track that builds slowly over a wonderfully sharp militaristic snare in the chorus before the whole track softens and rounds out with a much more mellow tone, the snare still very much evident but the sharpness taken away from it. Weirdly it reminds me of Big Country for some reason, it may be the crisp tone of that glorious guitar work.

So yes, this time you can very definitely consider me educated and I will absolutely be seeking out more from Explosions in the Sky. I seriously love this album and have had it on almost constant repeat for the last week – even though it means I have to stop and just sit, eyes shut, for 8 minutes every hour or so to listen to Memorial.