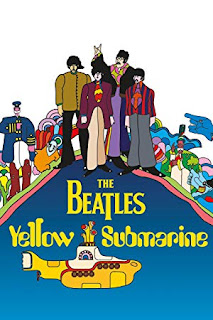 Inkeeping with the theme day over on our twin site at The DreamCage, Susan Omand dives into the 1968 Beatles film Yellow Submarine...

At least that’s how I remember the song going when I was 4 or 5 as we sang it on the bus going on an epic journey from school (where all the classes put together numbered about 40 kids) just outside the said Aberdeen aaaaalllll the way to Stonehaven (a trip of about 17 miles) for the annual school picnic by the seaside where, as the others all played by the outdoor swimming pool (yes, an outdoor pool in North East Scotland – the town planners obviously had a sense of humour) I sloped off to the bright lights and noise of the amusement arcade and honed my skills on the one armed bandit with a pocket of pennies.

Why am I telling you this? Because it was about at that age that I also first watched the 1968 animated film Yellow Submarine when it was on telly (my dad was an early adopter of technology so we were the first family in the village to have a colour TV) and I haven’t really watched it again for the past 40 odd years, so this seemed like a good chance to revisit a film that essentially inserted itself into my early childhood.

WHAT THE HELL WERE MY PARENTS THINKING?! Yes, it’s brightly coloured and cartoonlike but this is so much not a kids’ film. This is the stuff of surreal nightmares and must certainly explain a LOT about why I turned out like I did, not least my (I'm told) irrational dislike of Beatles music through a process of association. I mean, disembodied heads, strange plants, gun wielding hands for feet, people in fezzes with sharks for tummies, spinning clownhead sirens, disorientating landscapes and hideous concoctions of monsters?

But then I paused and thought about it. I don’t actually remember, as a child, being scared or confused by it. Sad for Jeremy the nowhere man, yes, intrigued by the beasts, entertained by the squeaky Blue Meanies and mesmerised by the psychedelia but not scared. So I looked at it from an objective, adult, viewpoint and, I have to admit, visually, it is an artistic masterpiece. The variation of animation styles, from cel shading to photo collage to a very painterly ink and watercolours style expertly reflect the artistic movements of the time. The cacophony of colour and plethora of pattern is so very sixties, even the monochrome art of the Pepperland people turned to stone is beautifully rendered in a charcoal style so reminiscent of the time. And there’s a lot of humour in the dialogue that I missed as a child too, knowing homages to the pop culture of the time, not least the Hamlet cigars ad which had me chuckling, and I loved the nuance of apples being the weapon of choice.

Would it stand up as chosen movie viewing for today’s Netflix generation? It’s pretty much a 90-minute music video and, if treated like that, then maybe, but as a feature film, not so much. It’s wonderfully arty but the plot and characters aren’t engaging enough on its own for a mainstream audience. There’s too much visual stimulation and not enough story progression going on that, if you didn’t understand the fact that you wouldn’t understand it, you wouldn’t understand it (if you know what I mean) and wander off, simultaneously bored and overwhelmed, in the middle.

And as for the music, well, you know my feelings on Beatles music already and I’m afraid that hasn’t changed, no matter how out of step with the world that makes me, and the same is true for the film. For its time it was incredibly clever and I can appreciate it as influential art but I don’t have to like it.