Turn That Noise Down - New Jersey 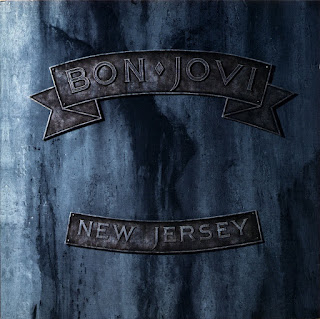 So many well-known albums turn 30 this year and Steve Taylor-Bryant and Susan Omand travel back to 1988 to revisit some of the sounds of their youth that made parents shout "Turn that noise down!" This week Steve remembers the hairspray and perm rock gods Bon Jovi…

Ah, New Jersey. What is there to say about New Jersey that hasn’t already been said? Yes, it is of its era and, yes, it is more pop now than rock, but I defy any of you to not singing along with the first three tracks. Lay Your Hands on Me, Bad Medicine, and Born to Be My Baby are singalong anthems that still to this day have middle aged slightly fat men who are approximately 43 years old unable to control their bad karaoke when one of these tracks come on in the car/pub/supermarket. Yes, I get strange looks in my local Morrisons when I start belting out Bad Medicine chronically out of tune but to hell with people that don’t let loose occasionally. Those three opening tracks are as iconic as any rock songs that came out of the 1980’s and are worth the price of the record alone. But, Bon Jovi are more musically talented than stadium anthems would have you believe. There is some musical greatness on this album outside of the opening songs.

Blood on Blood is as excellent a song as anything else released by Bon Jovi, and Homebound Train is as excellent as anything released by Aerosmith. I can’t listen to Homebound Train without thinking of Steven Tyler singing it. One of the first drummers I learnt from (outside of Buddy Rich and Evelyn Glennie for my percussion grades) was air drumming along to Tico Torres who is possibly one the most underrated drummers in musical history. That air drumming paid dividends years later when at a jam night someone wanted to sing Homebound Train and the house drummer didn’t know it. Still some of the most fun I ever had behind a kit. Wild is the Wind with Richie Sambora’s acoustic goodness on the introduction is a great tune and one that needs more outings by the band in their live sets, despite it sounding like a Richard Marx rip off right until the chorus. Ride Cowboy Ride is just glorious and if you don’t agree you need to investigate your life choices.

Stick to Your Guns is possibly the weakest of tracks on New Jersey and still better written and performed than most rock music that came out of the 80’s. Glorious. I’ll Be There for You is another that you can’t help singing along to, the band are tight, Alec John Such’s bass understated but effective and the kind of chorus that probably started life as a wedding speech. Let’s face it Bon Jovi know how to romance. I’m in love. 99 In the Shade is a sort of throwback to early Bon Jovi, this song wouldn’t feel out of place on Slippery When Wet or even the self-titled debut four years previous. It’s a track that perhaps belongs more on 7800 Fahrenheit, but what the hell, this one is glorious too. Love for Sale closes out the album and is perhaps more influenced by Sambora than Jon Bon Jovi as it certainly leads in its blues style more towards his Stranger in This Town album than maybe anything Jon released.

Overall it is likely the catchy anthemic style that makes this album feel so good after all these years. In 1988 when this came out it was the band's fourth album in four years and maybe we were all just so awash with Bon Jovi releases that we became addicted to them. It would be another four years before the next Bon Jovi record and a bit of a change in style with Keep the Faith, and possibly the bands last truly great record. Bon Jovi have survived for all these years because they are talented, but if you’re at a Bon Jovi gig it's these early songs you pine for. Keep the Faith was great, every album after that got a little weaker, so as a fan of the band and just bloody well enjoying myself, New Jersey is a pinnacle release. The last truly great but fun record to come from a band that played a huge part in my early life.