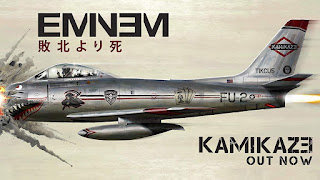 Available on digital now and with the CD being released this Friday, Steve Taylor-Bryant takes on the surprise new album from Eminem, Kamikaze...

Eminem has split opinion for a few years now, many fans and critics not impressed by the last few releases, and some, like me, just astounded by an artist at the very top of his craft. I’ll admit some of the earlier albums had a slightly more polished sound and were definitely more commercial, fun even, but I’ve enjoyed listening to Eminem maturing over the last couple of records and maybe people need to remember that he is technically a middle aged man now, he is clean of drugs now, he’s more serious about life now, all these events take a toll on the fun loving elements of life and almost force you to get serious and retrospective.

Kamikaze came from nowhere, no big marketing build up, no hype, just a tweet


and whilst you’ll see I loved this album as well, I’m seeing a lot more positivity from the public in general towards this release and I can’t help but wonder if the quiet release and no expectations due to no marketing might have helped.

The Ringer kicks off the album and honestly you can’t help but admire listening to a great at work. His tight rap and incredible lyrics spat in places with real venom (more on that later) and it’s classic Eminem facing every critic or individual that has ever stepped to him and a hostile Eminem is a great Eminem. Greatest follows and the chorus pretty much sums up my thoughts on him

Lucky You sees a collaboration with Joyner Lucas, who by the way is impressive to listen to, and it is a great version of opposites. Lucas raps about his struggles to be heard or respected by the music industry, lamenting his lack of Grammy nods for example, whilst Eminem is a multi award winner but isn’t loved anymore by the modern hip hop circuit. Both guys are impressive, I know I’ve used that description a lot but it’s damn true, and the speed that they release words in some sections is mind blowing.

Normal comes after a Paul Rosenberg skit and is a relationship track that has its moments but isn’t really for me. The tracks of Eminem’s discography I like the least all tend to be women related, but there we have it, I was never going to be in love with every track and it’s still good. Em Calls Paul is the next skit followed by Stepping Stone which is my track of the album. An angry Eminem is great but a retrospective and apologetic Eminem is something to behold and Stepping Stone sees him open up about the death of Proof and the end of D12 and the artists he came up with that never got as big as perhaps they could have been. Stunning doesn’t do it justice.

Track 8 is Not Alike features Royce da 5’9” and contains lots of names that I don’t know, not being as involved in the world as perhaps I was twenty years ago I’m not sure who the artists called out in this track but that doesn’t stop the enjoyment of the listen and it’s a collaborative effort with both guys really complementing each other’s style.

Kamikaze sees Eminem confront 2017 and the critical despondency to Revival. As is Eminem’s style he goes full anger mode about most of it. Some of it is funny to listen to, maybe not meant to be but amused me, but one of the biggest criticisms of Eminem since he first hit the scene was that his skin colour is the only reason he’s made it, which is crazy when you look at his body of work, but of course he comments on this better than I could...

But if the only reason I blowed is 'cause I'm white though
Why don't every other white rapper sell what I sold? (ooh)

Fall is back to angry Eminem and calling out those who dared say anything about him and he goes after them fully. A joy to listen to. Nice Guy and Good Guy, both featuring Jessie Reyez, are different in style to the rest of the album and really add to the record. I’m not used to the style being as old as I am so it took a couple of listens but both tracks really stuck with me. Venom closes out the album and, as you might imagine with it being the official song of the forthcoming Tom Hardy blockbuster, it’s the most commercial sounding but it’s still Eminem. Most commercial film songs don’t hit their mark but here you’re dealing with an Oscar winning lyricist and even in a money-making popularity contest like film he still does it his way. After watching the trailer for Venom (here) a couple of times I reckon this song will be the best part of the movie so you may as well just enjoy it as part of this album.

I saw a comment the other day on social media that stated Eminem was back! Whilst I’m pleased the album is being embraced this time around, I honestly felt like I was the only fan of Revival at times, I’m not sure where it is he’s apparently come back from? He never went away. In a twenty odd year career he’s always been impressive (there’s that word again) and is still as relevant today as he was when Slim Shady first hit MTV. How many rap stars are out there that can genuinely stand alongside Eminem for longevity, for fan pleasing, for sales, for awards? Not many. Kamikaze is a great record, I didn’t hate any track and only one on the entire record wasn’t quite my cup of tea. I’m 43 years old now and I’ve been listening to Eminem his whole career. He may not be as humorous as maybe he once was but neither am I. I’m a grown man with responsibility and anger at the world and an emotional guy who wonders often what his legacy is, what he’s leaving behind in the history of life. I’d settle for 1% of Eminem’s legacy, I’d settle for 1% of his talent and ability to keep testing his listeners and pushing the media. I’ve said it before and I’ll say it again, Kamikaze is a great record.