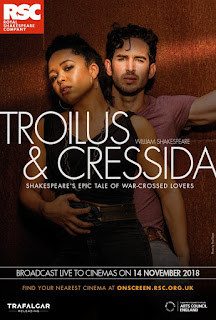 Troilus and Cressida swear they will always be true to one another. But in the seventh year of the siege of Troy their innocence is tested, and exposed to the savage corrupting influence of war, with tragic consequences.

Collaborating with virtuoso percussionist Evelyn Glennie in a world first, Gregory Doran and designer Niki Turner will create a sardonic futuristic vision of a world resounding to the rhythm of battle.

Leading the cast in what will be a 50/50 gender split company is Gavin Fowler as Troilus and Amber James as Cressida. Gavin Fowler was last at the RSC in Oscar Wilde’s Salome in the Swan Theatre in 2017. His other recent work includes King Lear, A Midsummer Night’s Dream and the RSC’s The Taming of the Shrew. He regularly appeared in Showtime TV’s Penny Dreadful. Amber James last appeared in the RSC’s 2016/17 season with roles in Antony and Cleopatra, Titus Andronicus and Dido Queen of Carthage. Other work includes The Two Gentlemen of Verona and A Streetcar Named Desire.

Director Gregory Doran said of the production “It’s a very special play which echoes the tone and mood of our times. We have a cast which combines some great RSC veterans with some of our younger rising stars, as well as reflecting a truly diverse array of talent from all around the UK.

"I am really interested to be exploring the re-gendering of roles in this testosterone-fuelled play to create a 50/50 gender-balanced cast. We have pioneered the re-gendering of roles at the RSC for many years, but this is the first time in the history of the company that we have made a conscious decision to do so for the entire play. The re-gendering is completely balanced and has been carefully achieved so that the women have exactly the same stage time and line count as the men.

“But much more important is the interpretative choices that may be opened up, and we hope may illuminate the play in ways we cannot yet imagine – for example, the role of Cassandra, the Trojan prophetess whose curse is that none believe or understand her, will be played by the talented Deaf actress Charlotte Arrowsmith.

“I am very proud, in our great journey through the canon, to be tackling this dark, sardonic funny and much under-rated play with such a splendid, talented cast."