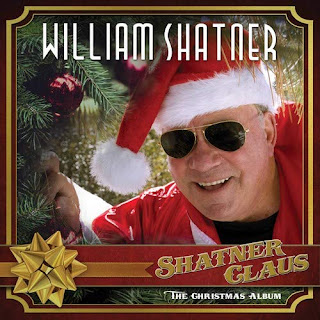 Attention, attention. This is not a drill. William Shatner has just announced that his very first holiday album: ‘Shatner Claus - The Christmas Album’ will be released on 26th October ...

But our own David Ames did it first HERE

William Shatner has assembled a truly eclectic roster of vanguards, icons and misfits for a holiday album unlike any that have come before it. The legend of stage, screen and spoken word has taken 13 holiday classics and turned them on their head, joined by the likes of Henry Rollins, Iggy Pop, Brad Paisley, Judy Collins, Billy Gibbons, Rick Wakeman, Todd Rundgren and more. See below for full track list and credits.

‘Shatner Claus’ gets into the holiday spirit from the very first notes. A sweeping set of strings introduces “Jingle Bells,” but the song quickly becomes amplified as William and Henry Rollins trade lyrical duties over an increasingly rambunctious beat. Next comes a grooving honky-tonk rendition of “Blue Christmas” with Brad Paisley. As the album unfurls it weaves through jazz, blues, rockabilly, bossa nova and beyond, balancing joyful and sentimental moments with blazing rock n’ roll, and big guitar solos from the likes of Billy Gibbons and Todd Rungdren. Other highlights include a memorable duet with Iggy Pop on “Silent Night,” and a tremendous presentation of keyboards courtesy of Rick Wakeman on “O Come O Come Emanuel.” A bonus track version of an even more revved-up version of “Jingle Bells,” also featuring Henry Rollins, is labeled “Punk Rock Version.”

William Shatner has cultivated a career spanning over 50 years as an award-winning actor, director, producer, writer, recording artist, and horseman. He is one of Hollywood’s most recognizable figures and a major philanthropist. He released his first studio album in 1968. In 2018 alone he has published a book and released an album of country music. ‘Shatner Claus’ is William’s third album for Cleopatra Records, following 2011’s ‘Seeking Major Tom’ and 2013’s ‘Ponder The Mystery.’