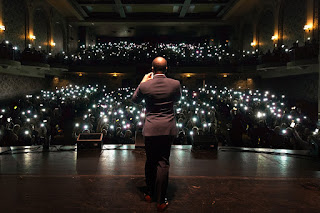 Do you know The Moth? The Moth is a nonprofit organisation dedicated to the art and craft of storytelling and its Mainstage event will be returning to London on September 29th...

The Moth began on a back porch in small-town Georgia, where founder, poet and best-selling novelist, George Dawes Green would spend sultry summer evenings swapping spellbinding tales with a small circle of friends. There was a hole in the porch screen, which let in moths that were attracted to the light, and the group started calling themselves “The Moths.” When he moved to New York City, George wanted to recreate the feeling of those nights in his adopted city. The first New York Moth event was held in George’s living room. But word spread fast, and the events soon moved to cafes and clubs throughout the city—and soon to popular venues throughout the country and beyond.

Since launching in 1997, the organisation has presented over 30,000 true personal stories, told live, without notes, in front of audiences around the world. The stories often go on to be heard on The Moth Radio Hour (listen here), which airs on over 470 public radio stations, and The Moth Podcast  (listen here), which is downloaded 47 million times a year.

Their regular Mainstage events, which happen all over the world, feature five storytellers who take the stage and share a true, personal story from their lives, sometimes raw and explicit, sometimes sweary, but always full of joy and heart, in equal measures. Stories of glory and defeat, taunting fate, laughing in the face of danger, and the moments that forever changed the course.

Here's a taster of the kind of thing you can expect.

The next Moth Mainstage happens on 29th September 2018, at Union Chapel, London. Find out more and book tickets HERE